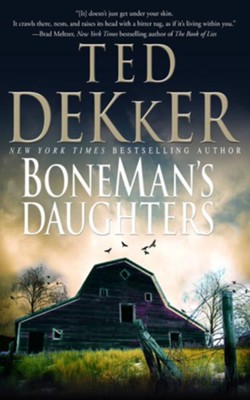 ▼▲
Military intelligence officer Ryan Evans is hot on the trail of Boneman, a Texas serial killer who murders his victims by breaking their bones. Evans witnessed this torture technique when he was serving in Fallujah. Now he's a suspect and his daughter is Boneman's latest target! Can he clear himself and save his daughter?

▼▲
They call him BoneMan, a serial killer who's abducted six young women. He's the perfect father looking for the perfect daughter, and when his victims fail to meet his lofty expectations, he kills them by breaking their bones and leaving them to die.

Intelligence officer Ryan Evans, on the other hand, has lost all hope of ever being the perfect father. His daughter and wife have written him out of their lives.

Everything changes when BoneMan takes Ryan's estranged daughter, Bethany, as his seventh victim. Ryan goes after BoneMan on his own.

But the FBI sees it differently. New evidence points to the suspicion that Ryan is BoneMan. Now the hunter is the hunted, and in the end, only one father will stand.

▼▲
TED DEKKER is a New York Times bestselling author of more than thirty novels with a total of more than 10 million books in print. He is known for thrillers that combine adrenaline-laced plots with incredible confrontations between good and evil.

▼▲
I'm the author/artist and I want to review BoneMan's Daughters - eBook.
Back
×
Back
×