The Good, the Bold, and the Beautiful: The Story of Susanna and Its Renaissance Interpretations
By: Dan W. Clanton Jr. 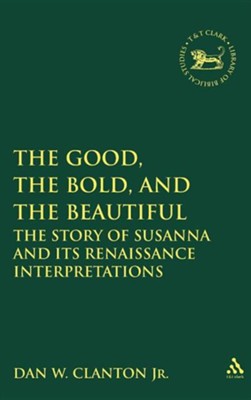 The Good, the Bold, and the Beautiful: The Story of Susanna and Its Renaissance Interpretations

▼▲
The story of Susanna and the Elders is one of the most interpreted and reproduced tales from the Apocrypha, and for good reason. In its compact narrative, it touches on attempted rape, female sexuality, abuse of power, punishment for the wicked, and voyeurism. The Good, the Bold, the Beautiful argues that the story of Susanna was written in the first century BCE, and Clanton provides a brief description of that century. He performs a narrative-rhetorical reading of Susanna and illustrates that the story uses sexual anxiety and desire to set up a moral dilemma for Susanna. That moral dilemma is resolved in two ways: Susanna's refusal to allow herself to be raped, and Daniel's intervention. Clanton argues that although the story has many mimetic features, it is the thematic function that is overriding, especially after Daniel's appearance. Put another way, the story's emphasis on Susanna, the Elders, and Daniel as "plausible people" is secondary to its stress on what those characters represent and the message it is relaying through those representations. Clanton analyzes chronologically selected aesthetic interpretations of the story found in the Renaissance. He shows that the prevailing artistic interpretation during the Renaissance focused on the mimetic, sexual aspects of the story because it deals with issues of patronage, and sex/gender that were current at the time. The Good, the Bold, the Beautiful argues that several Renaissance renderings provide counter readings that focus more on the value and themes in the story. These renderings provide models for readers to resist the sexually exploitative features of both the narrative and its interpretations. Clanton reflects on the need for the reader to resist potentially harmful interpretation, especially those that focus on the mimetic level of the story's rhetoric.

▼▲
I'm the author/artist and I want to review The Good, the Bold, and the Beautiful: The Story of Susanna and Its Renaissance Interpretations.
Back
×