Bold as a Lamb - eBook
By: Ken Anderson 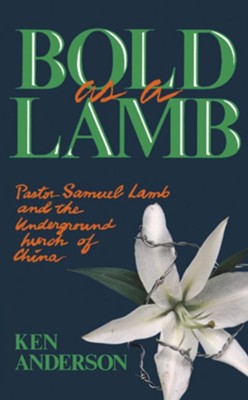 Bold as a Lamb - eBook

▼▲
You cannot understand China without meeting heroes like Samuel Lamb! In an age when secularism and materialism numb the human spirit, China's amazing Christians demonstrate the power of living faith. In 1950 China's Christians numbered about a million. Today, estimates range between 30 and 70 million! How did this body of believers grow so rapidly under atheism and materialism? Bold as a Lamb is the true story of Pastor Samuel Lamb. Imprisoned for more than twenty years for preaching the Gospel, he became the beloved secret pastor to hundreds of fellow inmates. After his release in 1978, he built a phenomenal "house church" congregation of more than a thousand. Soon, however, he became the special target of those determined to destroy the mushrooming house church movement in China. His church was closed and his ministry tools were confiscated. Yet this man remains undaunted, standing boldly -- and with spiritual grace, against fierce opposition. This is the fascinating, eye-opening account of one of China's best-known pastors, his dauntless congregation, and how they found joy and optimism in the face of relentless persecution.

Ken Anderson was a free-lance writer for more than half a century, authoring some forty books, hundreds of magazine articles and short stories. He was also active in the production of motion pictures and videos.