We are OPEN and SHIPPING - click here for shipping estimates
PRE-SUMMER CYBER SALE EXTENDED thru 6/1 ~ Over 2,500 items up to 90% off
Body & Soul: Human Nature & the Crisis in Ethics
By: J.P. Moreland, Scott B. Rae 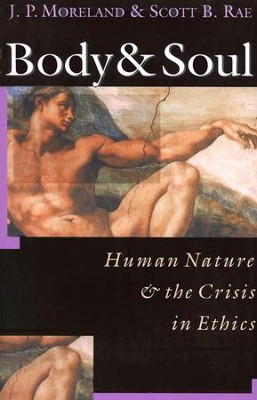 ▼▲
In this careful and thoughtful treatment J.P. Moreland and Scott B. Rae provide a reasonable and biblically accurate depiction of human personhood, relating it to crucial ethical concerns that affect each of us.

▼▲
While most people throughout history have believed that we are both physical and spiritual beings, the rise of science has called into question the existence of the soul. Many now argue that neurophysiology demonstrates the radical dependence, indeed, identity, between mind and brain. Advances in genetics and in mapping human DNA, some say, show there is no need for the hypothesis of body-soul dualism. Even many Christian intellectuals have come to view the soul as a false Greek concept that is outdated and unbiblical. Concurrent with the demise of dualism has been the rise of advanced medical technologies that have brought to the fore difficult issues at both edges of life. Central to questions about abortion, fetal research, reproductive techologies, cloning and euthanasia is our understanding of the nature of human personhood, the reality of life after death and the value of ethical or religious knowledge as compared to scientific knowledge. In this careful treatment, J. P. Moreland and Scott B. Rae argue that the rise of these problems alongside the demise of Christian dualism is no coincidence. They therefore employ a theological realism to meet these pressing issues, and to present a reasonable and biblical depiction of human nature as it impinges upon critical ethical concerns. This vigorous philosophical and ethical defense of human nature as body and soul, regardless of whether one agrees or disagrees, will be for all a touchstone for debate and discussion for years to come.

▼▲
Advanced medical and scientific technologies constantly challenge the way in which humankind perceives the connection between the physical body and the spiritual soul. Historically, philosophers and theologians have relied on the concept of substance dualism to explain the body/soul separation, but contemporary intellectual trends have ranged more toward Christian materialism. Sticking to tradition, professors Moreland and Rae (at Talbot School of Theology and Biola University, respectively) defend substance dualism (of the Thomistic, as opposed to the Cartesian, variety) and libertarian agency in this weighty tome. The authors convincingly acknowledge opposing arguments and philosophies while building a case of their own (e.g., that a human being is a substance, not a property-thing). They frequently quote from scholarship in the fields of ethics and religion, evaluating the body/soul dichotomy through the use of mathematical theorems and real-life examples. Although the authors note that they "have chosen to write the book at... a fairly high academic level," they also hope "a nonspecialist will be able to gain much." Only academics, philosophers and ethicists will grasp the book's meatier arguments, although skipping the metaphysical reflections of the first sections makes it slightly more palatable. (Apr.) Copyright 2000 Cahners Business Information.

▼▲
"In an age when some educated Christians are selling out the soul for a mess of materialistic pottage, Moreland and Rae's Body Soul is a significant restatement and cogent defense of the historic Christian teaching about human nature and responsibility. In contrast to typical antidualistic arguments, this book is grounded in the best exegesis of all the relevant biblical material and well-informed by the grand theological tradition before it proceeds to the metaphysics and sciences of human nature. Indeed, its properly ordered, multidisciplinary methodology is a crucial strength of the book. It first elaborates a detailed and philosophically sophisticated body-soul dualism that at the same time emphasizes the unity and functional holism of human existence. It then builds a formidable case that the traditional view of persons as substantial souls is necessary for a robust Christian understanding of moral responsibility and our obligation toward the unborn, the dying, reproductive technology and genetic engineering. Moreland and Rae defend dualism not so much to reassure us about what happens when we die as to guide us in how we should live. I welcome this timely and substantial volume."
"It's about time someone wrote this book. The reality of the soul is not an airy speculation with no importance but in fact that makes a profound difference to every department of human life. Unfortunately, physicalism--the view that the body, but not the soul, is real--has long been gaining ground with hardly a word of protest from Christian thinkers. Some have even taken up the physicalist banner themselves. Not so Moreland and Rae, who demonstrate in Body Soul that physicalism is philosophically and theologically defective, and unworthy of belief. This impressive treatise is not only a metaphysical tour-de-force but a guide to the most vexing ethical controversies of our time: abortion, fetal research, reproductive and genetic technologies, cloning, euthanasia and assisted suicide. I recommend Body Soul as an indispensable resource for students, physicians, philosophers, theologians, policy-makers and all who are serious about the great issues of the day."
"In a parched philosophical landscape dominated by reductive materialism, Body Soul by J.P. Moreland and Scott B. Rae is heaven-sent rain. This is the most powerful and persuasive case for substance dualism that I know. But it's much more than that. In addition to its cogent metaphysical psychology, Body Soul develops--in a unique and impressively rigorous way--the moral implications of the view that the human spirit is irreducibly real. No one interested in the philosophy of mind or in contemporary bioethics can afford to miss this trenchant and timely book."
"Here at last is a book with sufficient theoretical thinking to satisfy the scholar as well as enough everyday ethics to satisfy the rest. All biblically based Christians (not to mention others) will not agree with every bioethical conclusion reached here, but all will be challenged and edified by it in many ways. It will be a book to be reckoned with for many years to come."
"Moreland and Rae have produced an engaging study in Christian metaphysics. They marry an appreciation of Thomas Aquinas with biblical studies in the service of reexploring bioethical issues from abortion to euthanasia. For better understanding of the deep devisions in our debates on these issues, this volume provides an important key."
"The critical foundational issues underlying every ethical battle is personhood. Without a clear and communicable understanding of that issue, the battle is lost. That is why Body Soul is to the ethical war what the atomic bomb was to World War II. This book is long overdue and essential reading."
"J.P. Moreland and Scott Rae challenge the conventional wisdom and give a spirited defense of this form of dualism. Their work deserves the attention of every serious student of this topic."
"It is very good to see a version of dualism (constant with Christian tradition) not merely developed and defended but applied to most of the central issues of medical ethics which are pressing today--such as abortion, cloning, use of fetal tissue and physician-assisted suicide. The authors show convincingly how many of their views about medical ethics follow directly from their version of dualism."
" Body Soul is a quality piece of philosophical work. The authors certainly have done their homework, are familiar with the literature and know their way around an argument. . . . I welcome a book that is truly first-rate philosophically and uses arguments with rigor and care."

▼▲
I'm the author/artist and I want to review Body & Soul: Human Nature & the Crisis in Ethics.
Back
×
Back
×