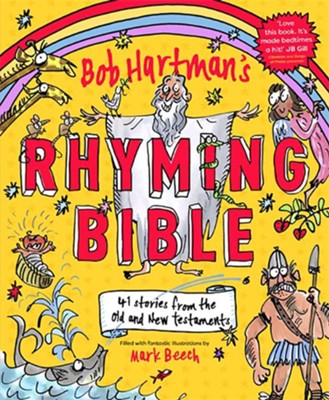 ▼▲
Internationally acclaimed storyteller and best-selling children's author Bob Hartman re-tells classic Bible stories in rhyme. Featuring popular tales from the Old and New Testaments, this is an ideal book for a parent to read with a child or for use in any storytelling setting with young children. Bob Hartman's fresh take on these well-loved stories are a joy to read aloud with any child, and also lend themselves to be used in any storytelling setting with children (toddler groups and all-age services).

▼▲
Bob Hartman has an international reputation as a storyteller and writer. He has entertained audiences on both sides of the Atlantic, including performances at the Edinburgh International Book Festival and Northern Children's Book Festival. His many titles for children include which has sold over 140,000 copies in the UK since its first publication in 1995. It has been translated into over eleven languages and spawned a number of spin-off titles. Born in the USA, Bob now lives in Wiltshire.

▼▲
I'm the author/artist and I want to review Bob Hartman's Rhyming Bible.
Back
×