We are OPEN and SHIPPING - click here for shipping estimates
Cast a Blue Shadow: An Amish Country Mystery Series
By: Paul L. Gaus 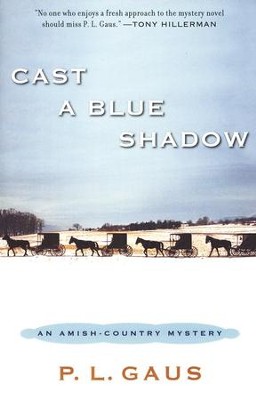 ▼▲
As the widow of a revered Millersburg College alumnus and one of the school's biggest donors, Juliet Favor has immense wealth that empowers her acquisition of whatever, and whomever she wants. So when Juliet is murdered the night before she is slated to sign a new will--one that would prove unfavorable to both the college and her two children, Sonny and sally--Sheriff Bruce Robertson faces no shortage of suspects.

▼▲
Book 4 of the Amish-Country Mysteries

When the widow of a revered Millersburg College alumnus and one of the school's biggest donors is brutally murdered, authorities fear that Martha Lehman, a young Mennonite college girl, holds the key. but Martha-who was found covered in blood the morning after the murder- isn't talking.

"Gaus's Amish-Country Mysteries examine the ethical, moral and scriptural nuances of the Amish, and the challenges their community faces co-existing with technology and temptations of the modern world."—Sharon Short, Dayton Daily News (Ohio)

Praise for Clouds without Rain

"Of all the dastardly crimes that might spark a good whodunit, a buggy robbery doesn't seem very promising—unless the author is P. L. Gaus, who writes a discerning series set among the Old Order Amish sects of Holmes County, Ohio... Gaus is a sensitive storyteller who matches his cadences to the measured pace of Amish life, catching the tensions among the village's religious factions."—Marilyn Stasio, New York Times

Praise for Cast a Blue Shadow

"An interesting who-dunit read, keeping me guessing in addition to providing insight into a unique way of life... This insightful novel will satisfy your hunger for a good murder mystery while it subtly educates you on the beliefs and values of a facet of society most know little about."—Bonnie Papenfuss, The Sahuarita Sun (Arizona)

Praise for Harmless as Doves

"For more than a decade, P. L. Gaus has been writing quietly spellbinding mysteries about one such group, the conservative Old Order Amish of Holmes County, Ohio... [A] sensitive account of the impact on this community when outsiders (that is, the cops) descend to deal with an Amish youth who has confessed to the murder of his fiancee's older, richer and very persistent admirer."—Marilyn Stasio, New York Times

"Gaus spins a fine mystery with a strong background of Amish faith and plenty of detail on the difficulties the Amish face in the modern age."—Michele Leber, Booklist

"What makes this book stand out as exceptional is the method in which Gaus describes events. There is intrigue, tenderness, religion, and much conflict... Blending of old-world culture with modern detective work makes this continuation of the same characters in key roles with different murders a true mystery series... If you like good mysteries, without salacious sex or mayhem, and adash of religion mixed in, you will want to read this book... A four star book and is highly recommended."—Clark Isaacs, Reviewer's Bookwatch

Praise for The Names of Our Tears

Praise for Separate from the World

"With each new mystery, P. L. Gaus treats us to yet another view of life among the Old Order Amish in Wayne County, Ohio... [H]e has great admiration for the Amish themselves, writing with quiet gravity about aspects of their lives rarely shown to strangers."—Marilyn Stasio, New York Times

"The latest in this too-little-known series again combines a fascinating, realistic look at an Amish community in Ohio with a gently satiric take on academic life."—Barbara Bibel, Booklist

▼▲
I'm the author/artist and I want to review Cast a Blue Shadow: An Amish Country Mystery Series.
Back
×
Back
×