We are OPEN and SHIPPING - click here for shipping estimates
PRE-SUMMER CYBER SALE EXTENDED thru 6/1 ~ Over 2,500 items up to 90% off
The Blue Cow - eBook Sugar Creek Gang Series #30
By: Paul Hutchens 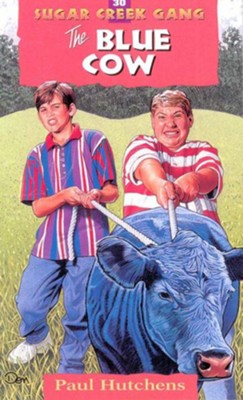 ▼▲
Bill and Poetry catch the biggest fish ever to swim in Sugar Creek and then are nearly run over by a stampeding blue cow. Shorty Long's fence-crossing cow brings all kinds of adventures to the Sugar Creek Gang. Bill and Shorty mix it up several times, but a crisis with Shorty's blue cow brings the two boys together. Experience the power of prayer as Bill and his mother fight to save the life of Shorty's blue cow.

▼▲
The late PAUL HUTCHENS, one of evangelical Christianity's most prolific authors, went to be with the Lord on January 23, 1977. Mr. Hutchens, an ordained Baptist minister, served as an evangelist and itinerant preacher for many years. Best known for his Sugar Creek Gang series, Hutchens was a 1927 graduate of Moody Bible Institute. He was the author of 19 adult novels, 36 books in the Sugar Creek Gang series, and several booklets for servicemen during World War II. Mr. Hutchens and his wife, Jane, were married 52 years. They had two children and four grandchildren.