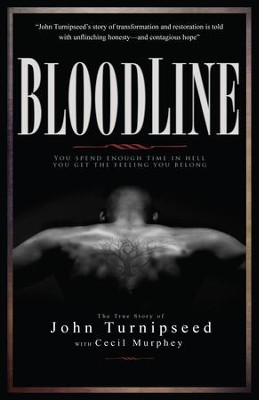 ▼▲
A breathtaking story of transformation, hope, and the influence of fathers! When young Turnipseed ends up living in Minneapolis with his alcoholic, womanizing dad, he becomes a gang leader, drug dealer, and pimp. Walk with him as he finds healing and restoration in the arms of his heavenly Father. 223 pages, softcover from Broadstreet.

Torn from an idyllic life with a loving, extended family in 1960’s Alabama, young Johnny Turnipseed found himself in Minneapolis, Minnesota with a father he no longer recognized and empty cupboards.  A.C. Turnipseed’s alcoholism and womanizing started a chain reaction of poverty, violence, addiction and despair that nearly destroyed three generations.

From lost and frightened little boy to gang leader, drug dealer and pimp to one of the nation’s most respected pioneers of community restoration, John Turnipseed’s story of transformation and restoration is told with unflinching honesty and contagious hope.

▼▲
John Turnipseed, a former gang leader and drug dealer, is a community leader, pastor, speaker, facilitator, and has written parenting curriculum. For more than 15 years, John was the director of the Center for Fathering at Urban Ventures in Minneapolis, Minnesota, and was promoted to vice president in 2014. Overcoming the deadly effects of a violent, absent father and the downward spiral of gang life, John is passionate about helping rebuild relationships and successful living.

Cecil Murphey has written and co-written more than 135 books, including the New York Times bestseller 90 Minutes in Heaven with Don Piper and Gifted Hands: The Ben Carson Story with Dr. Ben Carson. His books have sold in the millions and have brought hope and encouragement to countless people around the world.

I am drawn to stories of people overcoming adversity. Stories of the human spirit rising above and conquering over the struggles, hardships, and downright hell and we all encounter at some point during our life’s journey. This is what attracted me to John’s story and the reason I wanted to play his part in the Turnipseed movies. Hearing, reading, and seeing these types of stories motivate me to keepfighting and to keep the faith when I go through struggles. If you are at all like me, then just one chapter of John’s life will do the same for you."

John Turnipseed’s story shows how a changed heart will shift what you think of your self and the impact you can have. I thank God for you, John Turnipseed, for sharing your story, for allowing Jesus to change your heart, and for you deciding to love and lead others to be the best they can be. I’m calling all the John Turnipseed, types forward. Let the shifting begin. It is time to change the world, your state, your city, your community, your hood, your street, your family, and your life. But it starts with you. Go all in and finish the race. We all need you."

John Turnipseed is a living witness and example of the transformational power of Jesus Christ. John’s life experiences have made him an excellent candidate to speak into the life and brokenness of our communities due to the cycle of crime and culture of rebellion. One of the things that I have come to admire about John is his commitment to his family. Because John’s heart is to see people restored, his bloodline runs deeper than his family of origin. Through his work at the Center for Fathering, John has added members to his family countless beyond number. He has become a father to many, a brother to others, and a source of inspiration to all who know him."

Once a notorious gangster, drug dealer and pimp, John Turnipseed knows what it's like to feel trapped in sin. Now a licensed minister, Turnipseed wants those struggling to make a change and to know God hears their prayers.

"I always try to tell people to look for the evidence of God because it's always there and sometimes we just ignore it. We look past it [because] it doesn't look inviting to us," he said.

In his soon-to-be-released autobiography Bloodline, Turnipseed tells how his troubled childhood led him into a life of crime and how surrendering his life to Christ led him to become a helping hand for others living hard lives.

As a young child, Turnipseed's family attended church every Sunday. Then the family relocated from Alabama to Minnesota and his father, once a deacon and a member of the church choir, became a violent drunk who beat Tunipseed's mother daily.

Turnipseed said he prayed five to 10 times a day for the abuse to stop but it continued. He and his five brothers eventually stopped praying. He told The Christian Post, "I just felt that there was no God at that time."

But looking back, Turnipseed said God did intervene. "I see that He actually did send angels to help but we did not grab the angels' hands." The family stopped attending church regularly and he said, "Three times I remember different ministers tried to reach out to us and my mom wouldn't talk to them." His mother also forbade her sons from talking to school counselors.

Turnipseed rebelled against God by turning to the local pimps and drug dealers. He began running errands for pimps in exchange for sex with prostitutes at age 12. Then he was kicked out of school by age 16 for threatening to kill his principal while high on drugs.

As an adult, Turnipseed became involved in several illegal activities such as armed robbery, pimping prostitutes, and selling drugs and was constantly in and out of prison. His son, Little Johnny, and stepson, Roamel, had both followed in his footsteps, becoming drug dealers and gang members.

Turnipseed did not begin to seek God again until Little Johnny was shot outside of a party. Though he was in prison at the time, he cried out to God.

▼▲
I'm the author/artist and I want to review Bloodline.
Back