Skip to main content
Blood Letters: The Untold Story of Lin Zhao, a Martyr in Mao's China
By: Lian Xi
Stock No: WW644236 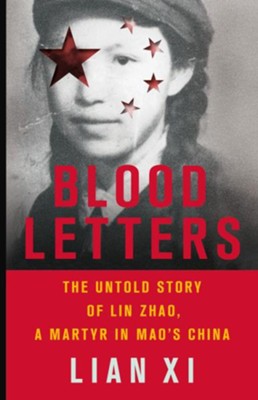 Blood Letters: The Untold Story of Lin Zhao, a Martyr in Mao's China

Blood Letters tells the astonishing story of Lin Zhao, a Chinese poet and journalist arrested by the authorities in 1960 and executed eight years later, at the height of the Cultural Revolution. The only Chinese citizen known to have openly and steadfastly opposed communism under Mao, she rooted her dissent in her Christian faith, and expressed it by writing in her own blood, at times on her clothes and on cloth torn from her bedsheets.

The historian Lian Xi has written the first authoritative, documented biography of Lin Zhao to appear in any language. It chronicles her torturous personal journey from her successive conversions to Christianity and communism to her bitter disillusionment with the revolution following the Anti-Rightist purges of 1957. Turning to poetry as a weapon, she castigated Mao as a villainous tyrant, and was soon arrested, subjected to repeated torture, and finally silenced.

Miraculously, Lin Zhao’s prison writings survived. Drawing on these works and others from the years before her arrest, as well as interviews with her friends, classmates, and other former political prisoners, Blood Letters paints an indelible portrait of courage and faith in the face of unrelenting evil. In the words of Liu Xiaobo, the late Nobel Peace Prize laureate, Lin Zhao is “the only voice of freedom left for contemporary China.”

▼▲
Lian Xi is a professor of world Christianity at Duke Divinity School. The author of Redeemed by Fire and The Conversion of Missionaries, he lives in Chapel Hill, North Carolina.

▼▲
"Blood Letters is one of the most important books on the Communist-era rights movements to be published in recent years. It is not only the first biography of Lin in English, but also the first in any language to carefully sort through the sometimes overwrought and polemical writing inspired by her martyrdom... highly readable, deeply informed..."—New York Review of Books
"[Lin Zhao's] story is grippingly related... her fate was inevitable: death by a firing squad. But thanks to scholar Lian Xi, her words survive."—Washington Times
"Blood Letters, carefully researched and timely, reveals the trajectory of a privileged girl who went from Christian to communist comrade to a Christian resister whose crime was being an 'impenitent counterrevolutionary.' Even told poorly, this would be a remarkable story. Xi tells it in memorable fashion."—Christian Century
"Blood Letters is an unsparing, meticulously researched, moving but unsentimental look at a complex and heroic figure. Without shying away from the realities of Lin Zhao's personal flaws and inner torment, Lian Xi's work also recognizes her important legacy, making it widely accessible for the first time to an English-speaking audience... an important-even vital-book."—Christianity Today
"A moving account of astonishing human courage in the leering face of human cruelty."—Kirkus Reviews
This book deeply moved me: it is the story of the most harrowing and heroic martyrdom in the history of faith in modern China. Lian Xi's work of witness is groundbreaking.—Liao Yiwu, exiled writer and author of God Is Red, The Corpse Walker, and For a Song and a Hundred Songs
"China's achievements and failures are usually celebrated or condemned on the mass scale. The vivid individuality of the men and women who have fought bravely to change their nation can fade from view. Blood Letters is the most powerful antidote to that amnesia. Lin Zhao's story, nearly erased or forgotten, will live as an example of civic and personal courage to inspire people in her country and elsewhere."—James Fallows, Atlantic
"A few courageous Chinese dissidents--Wei Jingsheng, Liu Binyan, Fang Lizhi, Liu Xiaobo, and others--have become known to the world. Their actions and their stories were able to emerge once Mao Zedong was gone. Others, who fought back while Mao was still alive, received bullets in the back of the head and immaculate erasure of their stories. They included Lin Zhao, Yu Luoke, Zhang Zhixin, and uncountable others whose names we do not know. Blood Letters, the rescued story of Lin Zhao, shows us an indomitable woman who was both a martyr and true pioneer."—Perry Link, author of Liu Xiaobo's Empty Chair: Chronicling the Reform Movement Beijing Fears Most
"Lin Zhao is a great hero of the faith, a brilliant and courageous figure no less than Bonhoeffer and Solzhenitsyn, willing to give her life for the truth of God. May a thousand flowers like Lin Zhao bloom in the China of today!"—Eric Metaxas, #1 New York Times bestselling author of Bonhoeffer, If You Can Keep It, and Martin Luther
"Blood Letters tells the story of Lin Zhao's martyrdom with the elegance her life demands.... Lian Xi's book will surely become a classic not only as we come to understand the struggle of Christians in China but also for how the story he tells helps us understand China." —Stanley Hauerwas, Gilbert T. Rowe Professor Emeritus of Divinity and Law at Duke University
"Blood Letters is a genuinely exciting book. Lian Xi sheds a whole new light on an extraordinarily important Christian figure (and martyr) who has hitherto been utterly unknown outside a narrow band of specialists.... A masterpiece."—Philip Jenkins, author of Crucible of Faith: The Ancient Revolution That Made Our Modern Religious World

▼▲
I'm the author/artist and I want to review Blood Letters: The Untold Story of Lin Zhao, a Martyr in Mao's China.
Back
Back