We are OPEN and SHIPPING - click here for shipping estimates
PRE-SUMMER CYBER SALE: Shop over 2,500 items up to 90% off through 5/26 >
Blood Brothers #2 - unabridged audio book on MP3-CD
By: Rick Acker 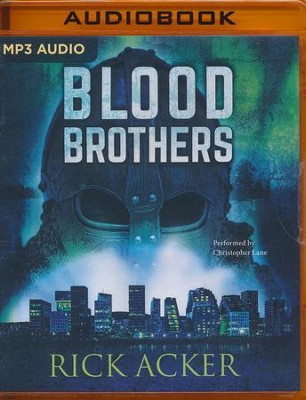 Brothers Karl and Gunnar Bjornsen built a pharmaceutical empire and develop a neural stimulant drug that increases strength and intelligence.  When sibling rivalry takes control, Gunnar flees with the secret formula and hires lawyer Ben Corbin to defend him.  Ben and his wife Noelle end up in Norway when the case turns up embezzlement and black market deals and the Russian mob.  Who ends up paying the ultimate price?

Attorney Ben Corbin travels to Norway to settle a dispute between Karl and Gunnar Bjornsen, feuding brothers on the verge of developing a revolutionary neural stimulant that could turn first responders into superheroes. But more than just the fate of their pharmaceutical empire is at stake.

What starts as a sibling rivalry takes a deadly turn as Gunnar flees with the secret formula and Karl finds himself in the crosshairs of a bribery investigation. As Ben navigates a web of intrigue involving the Russian mob, embezzled funds, and black-market deals, he and his legal team are targeted for violent reprisals. Whoever is behind the attacks, it quickly becomes clear that no one and nothing—including the miracle drug itself—is as it seems.

Will lust for profit and unbridled ambition drive Cain to slay Abel—or will the intrepid lawyer trying to save them from destroying each other pay the ultimate price?

▼▲
Bestselling author Rick Acker is supervising deputy attorney general in the California Department of Justice. Most recently, he and his team won a string of unprecedented recoveries against the Wall Street players who triggered the Great Recession. Acker has authored several legal thrillers, including When the Devil Whistles, which award-winning author Colleen Coble described as “a legal thriller you won’t want to miss.” He spends most of his free time with his wife and children.

▼▲
I'm the author/artist and I want to review Blood Brothers #2 - unabridged audio book on MP3-CD.
Back
×
Back
×