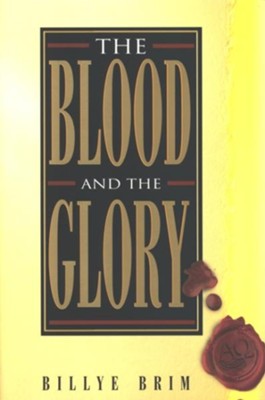 Blood and the Glory - eBook

▼▲
Salvation is more than just being saved from sin. Salvation is being saved to the glory of God. We were created in the likeness and the image of God, and it is His desire for us to be crowned with His glory and honor.
The Blood and the Glory reveals how the power of the Blood of Jesus and the glory of God fit together in God's plan of redemption. This exciting book draws from the experiences of great leaders of faith from the past to rekindle the power of the Blood of Jesus in the Church today. Combining personal stories with strong biblical principles, Billye Brim teaches the importance of depending upon the Blood of Jesus in your daily walk with God. You will understand as never before that without the Blood of Jesus, it is impossible to be prepared for the glory of God. By using the principles outlined in this book you will learn: We are in the last days. The circle of glory is almost complete. It is through the Blood of Jesus that we can be redeemed to our rightful place of glory and honor in the kingdom of God.

Billye Brim was born again at the age of eight in 1947 and was brought up to love God and His Word. After her initial in-filling of the Holy Spirit in 1967, she began the journey of fulfilling the call of God on her life.

Billye served as editor of publications for Kenneth Hagin Ministries from 1970 to 1980, as well as editing books for several other well-known Bible teachers including Dr. Lester Sumrall. In 1972 she began ministering regularly at her local church in Collinsville, Oklahoma. In 1980 she began traveling full time both nationally and internationally, with her focal points in Scandinavia and Europe. She has also ministered seven times in the Soviet Union.

After the homegoing of her husband in 1986, the Lord led Billye to study Hebrew in Israel. Working primarily through a Jewish ulpan (special language school), she takes Christians to Israel at least twice a year to see modern-day Israel through Jewish eyes. Bible prophecy is an important part of Billye's teaching. Billye is a frequent conference speaker (numerous times of Brother Kenneth Copeland's Believers Conventions) and ministers in churches, Bible schools, family camps, and on television. The emphasis of her ministry is on the Glory of God and His Glorious Church. She truly loves the Body of Christ and desires to see it become the Glorious Church Jesus promised to receive unto Himself.

▼▲
I'm the author/artist and I want to review Blood and the Glory - eBook.
Back
×
Back
×