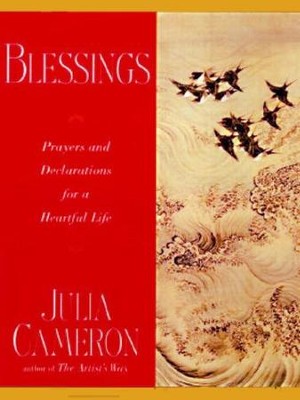 ▼▲
Through her workshops and writings (including her bestseller The Artist's Way), Julia Cameron has inspired millions to pursue their dreams. In the tradition of Heart Steps, Blessings reveals the keys she uses to reconnect herself with the source of her creative spirit. Focusing on gratitude and recognizing the power to change one's surrounding world by changing one's thinking, Cameron explains how she surrenders to the "deeper flow of life rather than willfully forcing artificial solutions."

By acknowledging the beauty, harmony, and synergy of life, readers learn through Cameron's inspiring prose how to cherish the gifts they have been given and use them to their fullest. Those who read and follow Cameron's advice and prayers and listen to Tim Wheater's healing music in the audiobook will realize how to achieve harmony in their lives and embrace the notion that they are part of a larger whole that holds them in a benevolent and protective view.

With Blessings, readers will understand the secrets of a life that is rich, beautiful, intricate, and valuable.

▼▲
Julia Cameron has been an active artist for more than thirty years, with more than 30 books (including bestsellers The Artist's Way, The Right to Write, The Writing Diet, The Prosperous Heart) and countless television, film, and theater scripts to her credit. Writing since the age of 18, Cameron has a long list of screenplay and teleplay credits to her name, including an episode of Miami Vice which featured Miles Davis, and Elvis and the Beauty Queen, which starred Don Johnson. While married to Martin Scorsese, she was involved in teh production of Taxi Driver, New York, New York, and The Last Waltz. She wrote, produced, and directed the award-winning independent feature film, God's Will, which premiered at the Chicago International Film Festival, and was selected by the London Film Festival, the Munich International Film Festival, and Women in Film Festival, among others. In addition to making film, Cameron has taught film at such diverse places as Chicago Filmmakers, Northwestern University, and Columbia College.

She is an award-winning playwright, whose work has appeared on such well-known stages as the McCarter Theater at Princeton University and the Denver Center for the Performing Arts.

From the popular workshops on unlocking creativity and living from the creative center she has taught for two decades, came her book, The Artist's Way, which has become an international bestseller, published in a dozen languages with worldwide sales of over one million copies. In the United States, The Artist's Way has appeared on many bestseller lists, including Publishers Weekly, The Los Angeles Times, The San Francisco Chronicle, The Washington Post, The Denver Post, and many others.

She has taught The Artist's Way workshops to such places as The Smithsonian, The New York Times, Omega Institute, Esalen, The Open Center, Interface, Wisdom House, and many others. As a result of her workshops and book, The Artist's Way, creativity groups have formed across America, and throughout the world, from the jungles of Panama to the Outback of Australia.

Her work on the artist's soul includes The Right to Write, which was published in January 1999, and appeared on such bestseller lists as The San Francisco Chronicle, The Los Angeles Times, and The Denver Post. Other works include The Vein of Gold, an amazing book of tools expressly for the healing and rehabilitation of the artist's soul in us all.

Cameron has had an accomplished, distinguished, and extensive journalism career, and her credits include writing on the arts for The New York Times, The Washington Post, and The Los Angeles Times. At age 23, Cameron was already writing features and book criticism for The Washington Post and later covered arts as a special correspondent for The Chicago Tribune.

She wrote for Rolling Stone and New York magazines during their most influential years, and was cited in Time magazine for her Watergate coverage in Rolling Stone. Hand-picked by legendary editor Jim Bellows, she wrote an OpEd column for Vogue magazine. Cameron has been a frequent columnist and contributor for American Film magazine for more than a decade. Her newspaper and magazine articles, essays and reviews on the arts number well into the hundreds. She won the prestigious Maggie Award for Best Editorial Writing for a story in American Film magazine on the danger of the intersection of sex and violence in movies.

She is a published poet, novelist and essayist. Her essays have been collected in several anthologies, including The Rolling Stone Reader and The Dark Room, a novel about violence and child abuse. Her book  Popcorn: Hollywood Stories is inspired by her days in The Business.

In addition to writing words, Cameron writes music. She has taught at the National Songwriter's Association in Nashville. After being a lyricist for others for several decades, Cameron recently began writing her own compositions. A main focus for her in the last three years has been music and sound healing, including writing Avalon, a musical based on the Arthurian legend and set in modern times.

“THE ARTIST’S WAY by Julia Cameron is not exclusively about writing—it is about discovering and developing the artist within whether a painter, poet, screenwriter or musician—but it is a lot about writing. If you have always wanted to pursue a creative dream, have always wanted to play and create with words or paints, this book will gently get you started and help you learn all kinds of paying-attention techniques; and that, after all, is what being an artist is all about. It’s about learning to pay attention.”
--Anne Lamott, Mademoiselle

“The premise of the book is that creativity and spirituality are the same thing, they come from the same place. And we were created to use this life to express our individuality, and that over the course of a lifetime that gets beaten out of us. [THE ARTIST’S WAY] helped me put aside my fear and not worry about whether the record would be commercial.”
--Grammy award-winning singer Kathy Mattea

“Julia Cameron brings creativity and spirituality together with the same kind of step-by-step wisdom that Edgar Cayce encouraged. The result is spiritual creativity as a consistent and nourishing part of daily life.”
--Venture Inward

“I never knew I was a visual artist until I read Julia Cameron’s THE ARTIST’S WAY.”
--Jannene Behl in Artist’s Magazine

“Julia Cameron’s landmark book THE ARTIST’S WAY helped me figure out who I really was as an adult, not so much as an artist but as a person. And award-winning journalist and poet, Cameron’s genius is that she doesn’t tell readers what they should do to achieve or who they should be—instead she creates a map for readers to start exploring these questions themselves.”
--Michael F. Melcher, Law Practice magazine

“This is not a self-help book in the normative sense. It is simply a powerful book that can challenge one to move into an entirely different state of personal expression and growth.”
--Nick Maddox, Deland Beacon

“THE ARTIST’S WAY (with its companion volume THE ARTIST’S WAY MORNING PAGES JOURNAL) becomes a friend over time, not just a journal. Like a journal, it provokes spontaneous insights and solutions; beyond journaling, it establishes a process that is interactive and dynamic.”
--Theresa L. Crenshaw, M.D., San Diego Union-Tribune

“If you really want to supercharge your writing, I recommend that you get a copy of Julia Cameron’s book THE ARTIST’S WAY. I’m not a big fan of self-help books, but this book has changed my life for the better and restored my previously lagging creativity.”
--Jeffrey Bairstow, Laser Focus World

“Working with the principle that creative expression is the natural direction of life, Cameron developed a three month program to recover creativity. THE ARTIST’S WAY shows how to tap into the higher power that connects human creativity and the creative energies of the universe.”
--Mike Gossie, Scottsdale Tribune

“THE ARTIST’S WAY is the seminal book on the subject of creativity and an invaluable guide to living the artistic life. Still as vital today—or perhaps even more so—than it was when it was first published in 1992, it is a provocative and inspiring work. Updated and expanded, it reframes THE ARTIST’S WAY for a new century.”
--Branches of Light

“THE ARTIST’S WAY has sold over 3 million copies since its publication in 1992. Cameron still teaches it because there is sustained demand for its thoughtful, spiritual approach to unblocking and nurturing creativity. It is, dare we say, timeless.”
--Nancy Colasurdo, FOXBusiness

Praise for VEIN OF GOLD, the second volume in the ARTIST’S WAY trilogy

“For those seeking the wellspring of creativity, this book, like its predecessor, is a solid gold diving rod.”
--PUBLISHERS WEEKLY

▼▲
I'm the author/artist and I want to review Blessings - eBook.
Back
Back