The blessing of the Lord will make you rich: Lifestyles of the Bibles' rich and famous - eBook
By: Sue Szczech 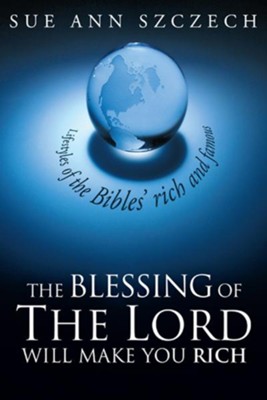 The blessing of the Lord will make you rich: Lifestyles of the Bibles' rich and famous - eBook

What would happen if King Solomon lived in this present age?
He would be a very good leader using his godly wisdom, which he had asked the Lord for when he first began to rule.
He would be a very good Christian writer; he wrote the proverbs and other writings.  He would be a very good minister of the gospel; people and rulers came from all over the world to hear him speak and would bring gifts to give to him.
He, with his father’s financial help, built a magnificent church filled with gold, silver, and precious stones to glorify the Lord.  He would be very wealthy, wearing very expensive and beautiful clothes; he would have many houses, and everything in them would be laden with gold and silver. Basically, he could have anything he wanted.
What would you think? What do you think when you see a minister of the gospel, pastor, or preacher on television, dressed very nicely, with expensive jewelry; a big, beautiful church; and a really nice car?
This book will take you on a journey through the Bible, studying the lives of the men and women who were blessed by God. It will change the way you think about what God really wants for us. He is a very good God and wants only the best for his children.

▼▲
I'm the author/artist and I want to review The blessing of the Lord will make you rich: Lifestyles of the Bibles' rich and famous - eBook.
Back
×
Back
×