Skip to main content
Blessing in Disguise, Red River of the North Series #6
By: Lauraine Snelling
Stock No: WW201964 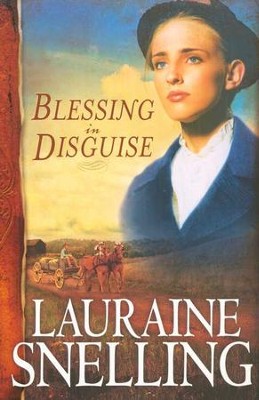 Blessing in Disguise, Red River of the North Series #6

▼▲
She Had Told Him She Was Headed for Blessing. Why Would He Not Take Her There?

The Bjorklund family has received word that Augusta Bjorklund is on her way from Norway to join them in North Dakota. When the train arrives in the town of Blessing with no Augusta aboard, the worried family hopes she will be on the train in the morning. But only her trunk arrives, so Bridget Bjorklund insists that Hjelmer, Augusta's brother, go find her.

▼▲
Her first mistake was emigrating alone. Was this one even worse?

Augusta Bjorklund, after discovering her intended bridegroom married someone else, decided to leave her broken heart in Norway and start a new life in America. But knowing no English, Augusta misunderstands a ticket agent's directions in St. Paul, Minnesota, and in the harried confusion, she boards the wrong train.

Her Bjorklund relatives eagerly await Augusta's arrival in North Dakota. When the train reaches the town of Blessing with the woman nowhere in sight, the worried family hopes she will be on the next train. But the following morning only her trunk shows up.

Arriving at the end of the line, Augusta is met by a handsome young rancher, Kane Moyer, who is waiting for his Norwegian mail-order bride....

She told him she was headed for Blessing. Why will he not take her there?

▼▲
Lauraine Snelling is an award-winning author of fifty-plus books with total sales of over two million copies. She also writes for a wide range of magazines and teaches at writers' conferences across the country. She and her husband make their home in Tehachapi, California.

▼▲
I'm the author/artist and I want to review Blessing in Disguise, Red River of the North Series #6.
Back
Back