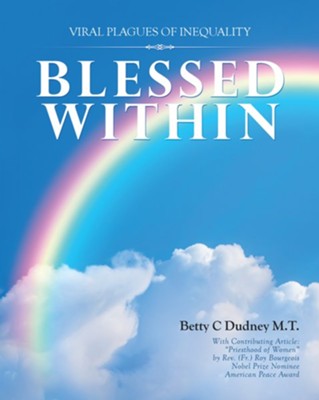 EQUALITY BALANCING
is
BALANCING OUR SELF-CENTERNESS
to
UNIVERSAL GOD CONCIOUSNESS

MANKIND’S INEQUALITY is more than beliefs of ‘MIGHT MAKES RIGHT’, Racism, Sexism, Ageism have allowed a God-like Biblical Plague of inequality. Allowed because those in power refuse to repent, continue to hide the Feminine half of GOD’S NATURE, creating MALE IDOLATRY SCRIPTURES by translating into patriarchal languages male terms like “FATHER”, “HE, HIS, HIM”, leaving out the female half of GOD’S IMAGE, when “BOTH WERE CREATED IN THE IMAGE OF GOD” from Genesis 1:27 ; Genesis 5:1.

Witnessed in Rome to last three Popes since 1985 for “Equality”, in The Church for the female half. Studied seven months in the Holy Land for original meaning for God, translated in todays patriarchal languages as just “Father”. Originally Hebrew and Aramaic used in Jesus time, “ABBA”, meaning “Heavenly Parent” and includes the Equal Mother Nature of God. What else the meaning of Father, without Mother!

As a Medical Technologist while living on Kauai Island found evidence of DNA changes of corn and rice food seeds being experimented by several large Corporate farms to make GMO changes to world’s food supply. The natural food seeds being sterilized with GMO’s by toxic and carcinogenic chemicals to create new seeds for profits that also sterilize Organic seeds when grown in near by fields.

Also witnessed in Rome three times, to last three Popes since 1985 for “Equality”, to end discrimination in the Church for the female half of God’s Image, Then studied seven months in the Holy Land for the original meaning of God, that has been translated to patriarchal languages such as English, as just “Father”.In the Hebrew and the Aramaic language used in Jesus time, “ABBA” meant “Heavenly Parent” and included both Father/Mother Nature of God.

▼▲
I'm the author/artist and I want to review Blessed Within: Viral Plagues of Inequality - eBook.
Back
Back