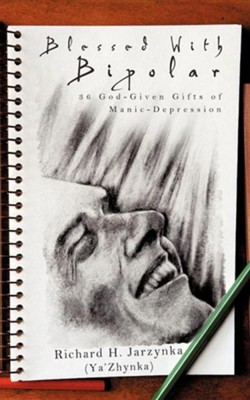 ▼▲
"I cracked up - for the first time - on June 4, 1988, three weeks short of completing my Masters degree in Psychology. Some would say I had a nervous breakdown. The psych ward doctors said it was major depression. I say that I saw just how evil my sin is in the eyes of God and it scared the hell out of me . . . I cobbled together some mad reality and blew a fuse . . . I lost my mind, never to be the same again. Thanks be to God Praise to You, Lord Jesus Christ " - from the first chapter "I am honored to endorse this book. Not only does it chronicle the journey of one man's pain and ultimate redemption; but will provide the essential hope to many who are commonly afflicted. This story will declare good news to the poor and proclaim freedom to the captives " Rev. Bruce Edwards, Allison Park Church of the Assemblies of God Richard Jarzynka (Ya'Zhynka) earned his masters degree in psychology from Duquesne University in 1989. He attended Law School on a full-tuition, merit-based scholarship until being expelled within one day of the Dean learning that he has bipolar disorder. Rich worked as a counselor, psycho-therapist, and program director with troubled teens and their families from 1984 - 2003. He is currently studying toward ministry certification with the Assemblies of God. And he is not offended by being called crazy, goofy, screwy, loony, or by any other synonym for mentally ill.

▼▲
I'm the author/artist and I want to review Blessed with Bipolar.
Back
×