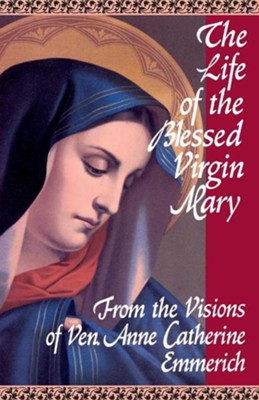 The Life of the Blessed Virgin Mary: From the Visions of Anne Catherine Emmerich

▼▲
Incredibly revealing and edifying background of Our Lady, her parents and ancestors, St. Joseph, plus other people who figured into the coming of Christ. Many facts described about the Nativity and early life of Our Lord, as well as the final days of the Blessed Mother–all from the visions of this great mystic. Impr. 411 pgs, PB

▼▲
Anne Catherine Emmerich was born to poor parents at Westphalia, Germany in 1774. When she was twenty-eight years old she became an Augustinian nun at Dulmen, and apparently began to experience ecstasies as a result of spiritual favors. She received the Stigmata in 1813, confined to her bed, and reportedly convinced a vicar-general, Overberg, and three physicians of her sanctity. She later reported that she had seen visions of Christ and the souls in purgatory as a child, as well as a circular core with three sections representing the Trinity. She is the author of The Dolorous Passion of Our Lord Jesus Christ, The Life of the Blessed Virgin Mary, Life of Jesus Christ and Biblical Revelations, and The Bitter Passion and the Life of Mary.

▼▲
I'm the author/artist and I want to review The Life of the Blessed Virgin Mary: From the Visions of Anne Catherine Emmerich.
Back
×