We are OPEN and SHIPPING - click here for shipping estimates
PRE-SUMMER CYBER SALE EXTENDED thru 6/1 ~ Over 2,500 items up to 90% off
Visits to the Most Blessed Sacrament and the Blessed Virgin Mary: Larger-Print Edition
By: Saint Alphonsus Liguori 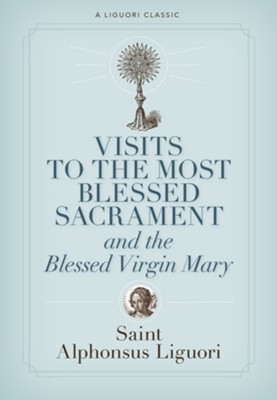 Visits to the Most Blessed Sacrament and the Blessed Virgin Mary: Larger-Print Edition

Saint Alphonsus Liguori (b. 27 Sept. 1696, d. 1 Oct. 1787) is best known for his Moral Theology writings. Alphonsus founded the Redemptorist Congregation. He made great pastoral reforms in the pulpit and confessional, replacing the pompous oratory of the time with simplicity. For nearly ninety years he had been a model of holiness, prayer, and mortification. Alphonsus fought against Jansenism, which later became condemned as heretical. He spent twenty-six years on the road preaching in the Kingdom of Naples. Saint Alphonsus was made bishop of Palermo at age 66. His life was filled with illness, eight times, he was administered the sacrament of dying. He was declared "Venerable", 4 May, 1796; was beatified in 1816, and canonized in 1839. In 1871, was declared a Doctor of the Church by Pope Pius IX.

▼▲
I'm the author/artist and I want to review Visits to the Most Blessed Sacrament and the Blessed Virgin Mary: Larger-Print Edition.
Back
×