We are OPEN and SHIPPING - click here for shipping estimates
Blessed Are the Peacemakers: Christ's Teachings of Love, Compassion and Forgiveness
By: Wendell Berry 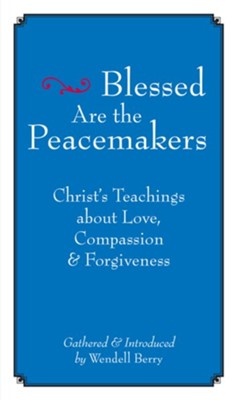 Blessed Are the Peacemakers: Christ's Teachings of Love, Compassion and Forgiveness

▼▲
For two thousand years, artists, social and cultural activists, politicians and philosophers, humanists and devoted spiritual seekers have all looked to the sayings of Jesus for inspiration and instruction. Unfortunately, on occasions too frequent and destructive to enumerate, the teachings of Christ have been either ignored or distorted by the very people calling themselves Christian. Today, we see a vigorous movement in America fueled by a politicized and engaged portion of the electorate involved in just such ignorance and distortion. Whether directed towards social intolerance or attitudes of warlike aggression, these right-wing citizens have claimed a power of influence that far exceeds their numbers.
This small book collects the sayings of Jesus, selected by Mr. Berry, who has contributed an essay of introduction. Here is a way of peace as described and directed by the greatest spiritual teacher in the West. This is a book of inspiration and prayerful compassion, and we may hope a ringing call to action at a time when our country and the world it once led stand at a dangerous crossroads.

▼▲
I'm the author/artist and I want to review Blessed Are the Peacemakers: Christ's Teachings of Love, Compassion and Forgiveness.
Back
×