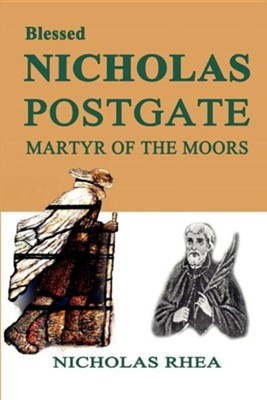 ▼▲
Father Nicholas Postgate is one of our best-loved martyrs whose lonely mission in the wilds of the North York Moors has captured the imagination of people of all faiths. Known as 'The Good Samaritan of the Moors' due to his generosity to all regardless of their status or religion, he walked around his huge 'parish' of Blackamoor, always declining the offer of a horse. He shared his food and clothes and visited people in remote areas to offer both spiritual and practical help, wanting to understand the plight of the poor and to empathise with them in every way. Most remarkably he began this work when he was more than sixty years old, and continued almost into his eighties. Although born in those moors, he attended the English College at Douai where he earned the degree of Doctor of Divinity, and then returned to England to work as a chaplain for wealthy families in great houses. That secret work took him to places far away from his beloved Blackamoor. Returning to the moors in the early 1660s, he embarked on a completely new role that was to earn him everlasting admiration. This work nourishing the Catholic faith came to the notice of Parliament just when the fabricated 'Popish Plot' of Titus Oates brought a return of the persecution of Catholics. A highly experienced Government agent, whose employer was alleged to have been murdered by Catholics, was ordered to hunt down, capture and prosecute Father Postgate. This book, the most comprehensive ever written about the martyr, relates that story and reveals previously unpublished information about Father Nicholas Postgate DD, Martyr of the Moors.

▼▲
I'm the author/artist and I want to review Blessed Nicholas Postgate: Martyr of the Moors.
Back