We are OPEN and SHIPPING - click here for shipping estimates
PRE-SUMMER CYBER SALE EXTENDED thru 6/1 ~ Over 2,500 items up to 90% off
Blessed John Paul II: Be Not Afraid
By: Susan Helen Wallace
Illustrated By: Charles Craig 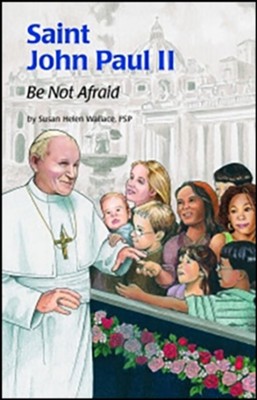 John Paul II, who served as Pope during the last 25 years of the 20th century and who led the Church with hope into the the third Christian millennium. He was born in 1920 to a devout Catholic family, and was named Karol Wojtyla. He lost his mother a month before he turned nine. As a young man he saw his world crumble when the Nazis swept into Poland and World War II broke out. Shortly thereafter, in 1941, his beloved father died.

This book from the Encounter the Saints Series tells the story of the pope whose message to the world throughout his pontificate was, "Do not be afraid!" In Saint John Paul II: Be Not Afraid, children ages 8-12 will be inspired to live their faith with courage and enthusiasm.

▼▲
I'm the author/artist and I want to review Blessed John Paul II: Be Not Afraid.
Back
×