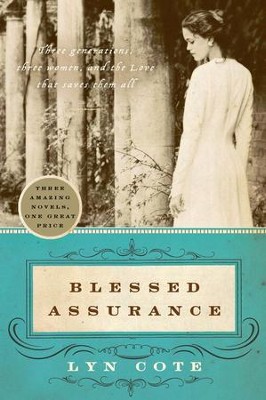 In Whispers of Love, Civil War widow Jessie Wagstaff must fend for herself and her son. When a stranger, Lee Smith, befriends Jessie's son, even though she recognizes nine-year-old Linc's need for a father figure, she's reluctant to let a new man into their life. When the Great Chicago Fire blazes, every heart is pushed to its limits.

In Lost In His Love, Jessie's son Linc, a social activist and reporter, charms his way through the upper class of San Francisco to build much-needed support for his fight against child labor. His main target is Cecilia Jackson, a beautiful heiress who doesn't recognize the crucial part she plays in this dangerous exploitation. As the secrets of her family's dark past are exposed, Cecilia must revive her own wounded spirit and find the strength to lean on the never-failing love of Christ. But when the 1906 earthquake hits, everyone's faith will be put to the test.

In Echoes of Mercy, Meg Wagstaff challenges the racial barriers of 1920s New Orleans in order to prove that her childhood friend did not commit murder. The stubborn lawyer prosecuting the case, Gabriel St. Clair, is an authentic Southern gentleman who makes the mistake of underestimating Meg, both her tenacity and her charm. Despite their many differences, sparks begin to fly. But when Meg discovers the truth, will Gabe be able to protect her from those who can't afford to have justice prevail?

An award-winning author of both contemporary and historical inspirational romance, Lyn Cote is an active member of RWA and the American Christian Fiction Writers. A 2006 RITA Award finalist for Best Inspirational, as well as a finalist for the HOLT Medallion and the National Readers Choice Award, Lyn lives with her husband in Wisconsin.

“Each of these stories is riveting, bringing some of our most tragic times to light: the great Chicago fire, the San Francisco Earthquake of 1906, and the rough and tumble era of Prohibition and civil rights.…a wonderful collection of special stories that is sure to be the perfect gift.” — Romance Reviews Today

▼▲
I'm the author/artist and I want to review Blessed Assurance - eBook.
Back
Back