Skip to main content
SPRING CYBER EVENT STARTS NOW: And it's a really BIG deal! Up to 88% off through 5/24>
Blessed Among all Women
By: Robert Ellsberg
Stock No: WW524395 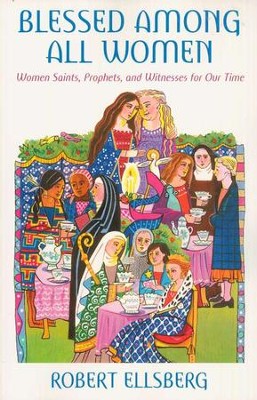 Blessed Among all Women

▼▲
With a record-tying three Catholic Press Awards to its name, Blessed Among All Women has been a sensation in religious publishing. Robert Ellsberg gained renown with his first book, All Saints, which has become a modern classic of devotional writing (over 80,000 copies sold). Using that classic as his starting point, Ellsberg's Blessed Among All Women offers devotional sketches on history's greatest women. From Joan of Arc and Dorothy Day to Emily Dickensen, from Anne Frank to Mary Magadalene and Lady Godiva, Ellsberg offers insights into the way that women of all faiths and backgrounds have lived out the lives of sanctity, mysticism, social justice, and world reform. The material is organized around beatitudes, with each section discussing women who have excelled in one aspect of spiritual life---including peacemaking and purity of heart.

Robert Ellsberg graduated from Harvard College with a degree in religion and literature and later earned a Masters in Theology (ThM) from the Harvard Divinity School. From 1975-80 he interrupted his college studies to join the Catholic Worker community in New York City, serving for two years (1976-78)as managing editor of the Catholic Worker newspaper. He worked with Dorothy Day for the last five years of her life, an experience that prompted his conversion to Catholicism and shaped his subsequent life. His first book was an anthology of Dorothy Day's writings. Since 1987 he has served as editor-in-chief of Orbis Books, publishing arm of the Maryknoll Society. In 2006 he also became Publisher at Orbis. He lives in Ossining, New York, with his wife and their three children.

▼▲
Winner of three Catholic Press Awards. The best-selling author of All Saints presents this new collection of devotional sketches on history’s greatest women. From Joan of Arc to Anne Frank to Mary Magdalene, Ellsberg offers insights into the lives of women that inspire us.

▼▲
I'm the author/artist and I want to review Blessed Among all Women.
Back
Back