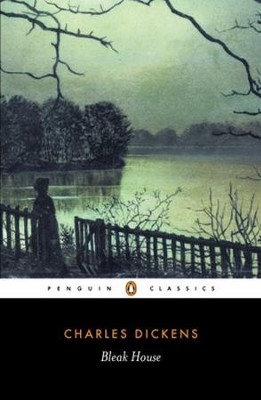 ▼▲
Bleak House opens in the twilight of foggy London, where fog grips the city most densely in the Court of Chancery. The obscure case of Jarndyce and Jarndyce, in which an inheritance is gradually devoured by legal costs, the romance of Esther Summerson and the secrets of her origin, the sleuthing of Detective Inspector Bucket and the fate of Jo the crossing-sweeper, these are some of the lives Dickens invokes to portray London society, rich and poor, as no other novelist has done.

As the interminable case of 'Jarndyce and Jarndyce' grinds its way through the Court of Chancery, it draws together a disparate group of people: Ada and Richard Clare, whose inheritance is gradually being devoured by legal costs; Esther Summerson, a ward of court, whose parentage is a source of deepening mystery; the menacing lawyer Tulkinghorn; the determined sleuth Inspector Bucket; and even Jo, the destitute little crossing-sweeper. A savage, but often comic, indictment of a society that is rotten to the core, Bleak House is one of Dickens's most ambitious novels, with a range that extends from the drawing rooms of the aristocracy to the poorest of London slums. This edition follows the first book edition of 1853, and includes all the original illustrations by 'Phiz', as well as appendices on the Chancery and spontaneous combustion. In his preface, Terry Eagleton examines characterisation and considers Bleak House as an early work of detective fiction.

▼▲
Charles Dickens was born on February 7, 1812, in Landport, Portsea, England. He died in Kent on June 9, 1870. The second of eight children of a family continually plagued by debt, the young Dickens came to know not only hunger and privation,but also the horror of the infamous debtors’ prison and the evils of child labor. A turn of fortune in the shape of a legacy brought release from the nightmare of prison and "slave" factories and afforded Dickens the opportunity of two years’ formal schooling at Wellington House Academy. He worked as an attorney’s clerk and newspaper reporter until his Sketches by Boz (1836) and The Pickwick Papers (1837) brought him the amazing and instant success that was to be his for the remainder of his life. In later years, the pressure of serial writing, editorial duties, lectures, and social commitments led to his separation from Catherine Hogarth after twenty-three years of marriage. It also hastened his death at the age of fifty-eight, when he was characteristically engaged in a multitude of work.

Nicola Bradbury is Lecturer in English at the University of Reading.

▼▲
I'm the author/artist and I want to review Bleak House.
Back