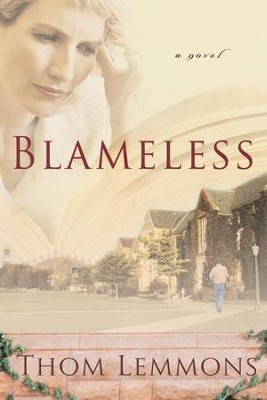 ▼▲
Is it possible to find unconditional love in a world of expectations?

Professor Joseph Barnes is attractive, intelligent, and successful–beloved by both his students and fellow university faculty. Despite her professional reservations, Alexis, the dean of Joe’s college, finds herself drawn to him and recognizes his interest in her.

But when Joe’s career begins to crumble, Alexis has to decide whether or not to rescue Joe from his circumstances. If she does save him, how can she be sure he loves her for herself–and not for what she can do for him? Can she fight the ghosts of the past that haunt them both?

Three well-intentioned friends and an ambitious department secretary complicate the delicate situation between Alexis and Joe in this modern retelling of the biblical story of Job. Thoughtful and clever, Blameless asks, what does it mean to love without expectations? And in the midst of losing it all, is it possible to find everything you’ve been looking for?

▼▲
Thom Lemmons has published numerous works of fiction and non-fiction, including Sunday Clothes and the best-selling Jabez: A Novel. He is the senior editor at Texas A&M University Press.

▼▲
In his book, Blameless, Thom Lemmons gives readers the inspiration to persevere in difficult and sometimes unfair circumstances. He tells the story of a modern-day Job named Joe Barnes, a college professor unjustly accused of having inappropriate relations with an attractive student in years past. He experiences depression, blaming himself for his trials, anger for the accuser, fear over losing his teaching position, and confusion in love from a budding relationship with the woman who is dean of his university.
This book is mostly characterized by clean, coherent sentences. However, too often Thom alludes to obscure historical and literary figures. If you are not a literary expert, whole conversations among a few of the professors at the university become a chore to read, forcing the discomfited reader to research person after person to appreciate the humor of each statement. A fine line exists between witty repartee and laborious inside jokes, and Lemmons crosses that line. Moreover, the lingo of the characters is moderately interesting but not always believable. The main characters are middle aged and speak the appropriate jargon; however, whenever a college student speaks, Thoms wordage doesnt change to fit the part. A male student used the words fanny and rear, incredulity quickly turning to agitation. On the other hand, plotlines are easy to follow and impressive foreshadowing instances are given to lead us expertly to the conclusion of a charming story.
Joe Barnes is the picture of charisma and allure. The new guy at the university, he quickly becomes a favorite of everyone, especially the dean, Alexis Hartnett. When Alexis unhappy secretary tries to help Alexis see the real Joe Barnes, she digs up a twelve-year-old allegation of sexual harassment at another college. His job is on the line, but Alexis is uncertain if her aid would be unethical and, more importantly, she fears that she would never know if Joe only loved her for her authority and ability to get him what he wanted. For weeks, the two engage in a bumbling dance to discover truth and, ultimately, unconditional love.
Blameless is a sweet, though unrefined story. It offers an array of delightful characters to which readers can relate emotionally, if not realistically. Many readers will empathize with the loneliness and consequent search for pure love; however, in between the spots of good storytelling, they may become frustrated and embarrassed by the authors insistence on sounding educated, mentioning people and using words not often heard or read. Even so, as the love of the matured generation is a slightly different sort, I am glad to have read of it, but I would not recommend this book to anyone younger than thirty-five and without an interest in literature. -- Hannah Selleck, Christian Book Previews.com

▼▲
I'm the author/artist and I want to review Blameless - eBook.
Back
Back