Blame It On The Mistletoe, Brights Pond Series #4
By: Joyce Magnin 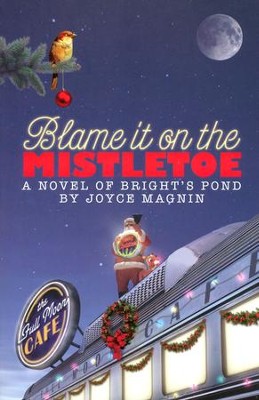 Blame It On The Mistletoe, Brights Pond Series #4

Welcome back to Bright's Pond, where strange happenings are afoot at the Greenbrier Nursing Home.

The folks have suddenly grown younger, happier, and even a bit friskier thanks to Leon Fontaine, the newest Paradise Trailer Park resident. But Mildred Blessing is suspicious and sets out to investigate while the wedding to end all weddings is being planned. Only, in Bright's Pond, nothing ever really goes as planned . . .

▼▲
Is There Really a Fountain of Youth in Paradise?
Welcome back to Bright 's Pond, where strange happenings are afoot at the Greenbrier Nursing Home. Strange even for Bright 's Pond. The residents suddenly act like kids again riding trikes, climbing trees, and of all things falling in love. Some of the townsfolk blame it on the crooked new gazebo, or its builder, a quirky little man who quotes Don Quixote, collects water from the fountain at the Paradise trailer park, and disappears on a regular basis.
While Chief of Police Mildred Blessing investigates the mystery, Griselda and her friends deal with a luau Thanksgiving, preparations for the Christmas pageant, and maybe even an upcoming wedding. Only, in Bright 's Pond, nothing ever really goes as planned . . .
"What's better than Bright's Pond? Bright's Pond at Christmas time. Magnin hasn't just created characters--she's created friends you'll love spending time with. You'll love every page of this quirky delight, and when that last chapter is read, you'll be ready for more of Griselda and the rest of the Bright's Pond residents." - Jenny B. Jones, Award-winning author of romantic comedies such as "Save the Date" and A Charmed Life series

"The queen of quirk does it again. With her signature wit and charm and penchant for surprise, Joyce Magnin takes us on a leisurely read through Bright's Pond, where uncannily loveable chaeracters reside -- God in the midst of them. I want to move there." - Nancy Rue, author of The Reluctant Prophet"Creative and fun, a visit to Bright 's Pond for the Holidays is just what the doctor ordered. Who can resist spry octogenarians in hot pursuit of the Fountain of Youth or romance in trouble But it is the endearing thread of love and sympathy that runs through the characters that makes readers return." - Cathy Gohlke, Christy Award winning author of William Henry is a Fine Name and I Have Seen Him in the Watchfires

▼▲
Joyce Magnin is the author of several books, including The Prayers of Agnes Sparrow, named one of the "Top 5 Best Christian Fiction Books of 2009" by Library Journal. Her short fiction pieces and articles have been published in such magazines as Relief Journal, Parents Express, Sunday Digest, and Highlights for Children. A member of the Greater Philadelphia Christian Writers Fellowship, Joyce is a frequent workshop leader at various writers conferences and womens church groups. She has three children and one grandson, and is mom to a neurotic parakeet who lives with her in Havertown, Pennsylvania.

▼▲
Blame it on the Mistletoe is the fourth installment of Joyce Magnin's Bright's Pond series. When residents of the local nursing home begin to act strangely, riding tricycles down hallways and falling in love in their late nineties, Griselda Sparrow observes as Police Chief Mildred Blessings investigates the strange happenings. Meanwhile, Sparrow deals with her own romantic controversy, caught between a man whom she last dated in high school and an exciting pilot teaching her how to fly.

Magnin writes in a wacky, humorous tone, with short interludes of serious conflict. Griselda struggles with the guilt of leaving her morbidly overweight sister, Agnes, in the nursing home to control her weight, and she displays almost unbearable immaturity regarding her relationships.

Griselda is a middle-aged woman living in an absurd, high school fantasy. She deals with lingering feelings for Zeb Sewickey, her on-again, off-again high school sweetheart, whom she refuses to marry, and Cliff Cardwell, a pilot giving her regular flying lessons. When investigating Greenbrier Nursing Home, Chief Blessings suspects sinister dealings like drugs, but Griselda offers a strange alternative solution: the fountain of youth. All the while, the characters anticipate a Hawaiian-themed Thanksgiving, a Christmas pageant, and a wedding.

Griselda is a relatable character for most women, though her constant indecision about whether to marry her long-time lover or to abandon the comfortable life and embark on a new relationship becomes annoying. Regardless of her frustrating behavior, readers also become torn between the poor, love-struck Zeb and the charming, exhilarating Cliff. In all of Griselda's indecision, she forgets to turn to God for guidance in her choices. Proverbs 3:5 states, "Trust in the Lord with all your heart and do not rely on your own insight." Had Griselda trusted God's path for her, she would have saved herself a lot of time. Readers are also wrapped up in the mystery around the nursing home and yearn for an explanation, whether it is drugs or the mythical fountain of youth come alive in Greenbrier Nursing Home.

Blame it on the Mistletoe is a fun story, though quite silly at times, but it's an entertaining book for the holiday season. No doubt, Bright's Pond fans will not be disappointed in their favorite quirky characters. Those new to the series will enjoy Magnin's offbeat humor and the strange individuals who reside in Bright's Pond. The tale provides inspiration for middle-aged women to the elderly who want a chance to be young again. - Alli Russell, www.ChristianBookPreviews.com

▼▲
I'm the author/artist and I want to review Blame It On The Mistletoe, Brights Pond Series #4.
Back
×
Back
×