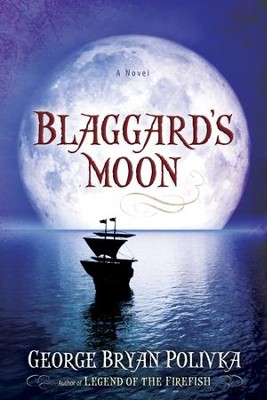 From the author of the highly praised Trophy Chase Saga comes this exciting swashbuckling tale of a pirate sentenced to die for the crime of mutiny.

As he awaits his fate, this pirate (none other than the delightful Smith Delaney from the Trophy Chase Saga) ponders his life and the events that have brought him to this fate.

In the process of remembering, and in grappling with mercy and justice as they have been played out in his life, a tale is spun, a tale of true hearts wronged, noble love gone awry, dark deeds done for the sake of gold, and sacrifices made for love. In the end, our pirate will come face–to–face with himself, with his own death, and with a God who promises grace where none is deserved.

Readers of Christian fantasy will once again be swept away by Bryan Polivka’s compelling storytelling abilities. As Publisher’s Weekly said of the author’s first book, “Readers will be flipping pages eagerly.”

▼▲
Gruesome death, heart pounding violence, terrible crimes, wild adventure, romance, gifted storytelling (by author and characters), vivid pictures playing on the readers mind-screen, a totally believable fantasy world filled with a wide assortment of convincing people, pirates, unscrupulous business men, daring marines, the ubiquitous mermonkeys, and one little girl. All this, and more, are yours when you open Blaggards Moon. A triptych, this book braids together three strands. There is narrator Delaney, a pirate marooned precariously on a post in the middle of a dangerous pond; a type of Everyman  we all sit on a perilous post in the axis of societys dangers. Jenta is the second strand; a lovely young woman, sought after by many men, born low and aimed high by her mother. Determined to do what needs to be done, Jenta ably uses all the vagaries of her heritage. And third, a large, debauched group of pirates pursued by their relentless nemesis, our not-as-cold-blooded-as-he-thinks-he-is protagonist. Add to this blend cataclysmic battles of Shakespearean proportions, some breathtaking reading, an eminently satisfying denouement, and enough left over wisps to provide the lead into another book.

Take the book of Job, mix well with Ecclesiastes, and you have The Blaggards Moon, plus all the blaggard (blackguard; scoundrel) characters contained therein. Pirates are a perennially popular theme as evinced by a recent series of movies. Author George Polivka uses them with dexterity in this, the next installment in his Firefish series. With both pathos and an underlying current of humor, Polivka conjures an engrossing story which is also a parable about fighting the world (business), the flesh (self), and the devil (pirates); the Christian fight against principalities and powers. A good summary of the plot is found in Ecclesiastes 9:2, It is the same for all, since the same event happens to the righteous and the wicked, to the good and the evil, to the clean and the unclean, to him who sacrifices and him who does not sacrifice. As the good one is, so is the sinner, and he who swears is as he who shuns an oath.

A satisfying fantasy, which remains true to its world while ably reflecting ours and our struggle to cope with Christian values, Blaggards Moon will be enjoyed by all capable readers of any age. It is good escapist reading, which also leaves you with a wide variety of seed thoughts.  Donna Eggett, www.ChristianBookPreviews.com

▼▲
I'm the author/artist and I want to review Blaggard's Moon - eBook.
Back
Back