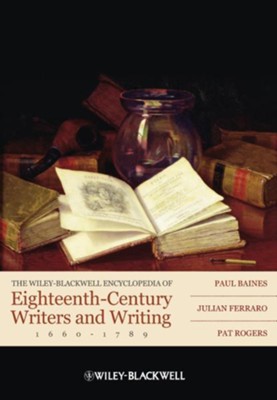 ▼▲
The Wiley-Blackwell Encyclopedia of Eighteenth-Century Writers and Writing1660-1789 features coverage of the lives and works of almost 500 notable writers based in the British Isles from the return of the British monarchy in 1660 until the French Revolution of 1789.

▼▲
Paul Baines is Professor, School of English, University of Liverpool. He is the author of The House of Forgery in 18th-Century Britain (1999), The Complete Critical Guide to Alexander Pope (2000), The Long Eighteenth Century (2004), and Edmund Curll: Bookseller (with Pat Rogers 2006), and editor of Five Romantic Plays 1768-1821 (2000). Julian Ferraro is Lecturer, School of English, University of Liverpool. He is the author of several articles on literature of the period and is one of the editors of The Poems of Alexander Pope in the Longman Annotated English Poets (2010). Pat Rogers holds the DeBartolo Chair in the Liberal Arts, . He is one of the foremost authorities on eighteenth-century literature and has written or edited over thirty books on the period. He has worked extensively on Alexander Pope, Samuel Johnson, Henry Fielding, and Daniel Defoe, among many others. His recent publications include The Alexander Pope Encyclopedia (2004), Pope and the Destiny of the Stuarts (2005), and the edited collection, The Cambridge Companion to Alexander Pope (2008).

"As with any good collection of biographical essays, one finds many humanizing snippets that bring the century closer to us than any accumulation of facts and dates can do ... The volume reminds us why we fell in love with this period."  (The Scriblerian and The Kit-Cats, 1 October 2013)

"This modest volume offers an excellent reference resource for students and scholars, but, as the authors explain, their aim is not only provide ‘reliable and accessible information’ but also ‘to offer a kind of browsing sense of interconnection between writers, and indeed a sample of the collective variety of the period’ (p. xxii)." (Years Work in English Studies, 1 August 2013)

"Excellent ... The range of authors covered in the encyclopaedia, while not exhaustive, should definitely be sufficient for most undergraduate or postgraduate students." (Journal for Eighteenth-Century Studies, 17 July 2013)

▼▲
I'm the author/artist and I want to review The Wiley-Blackwell Encyclopedia of Eighteenth-Century Writers and Writing 1660 - 1789 - eBook.
Back
Back