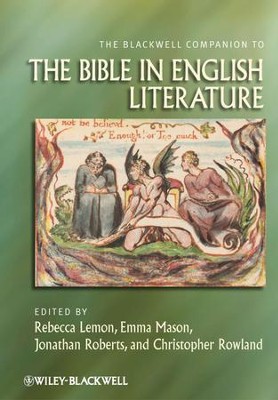 The Blackwell Companion to the Bible in English Literature

▼▲
You'll discover that English literature is saturated with allusions and references to Scripture from The Pearl and William Langland through Milton, Shakespeare, and Donne to Methodist hymn writers, Jane Austen, and T.S. Eliot. "A true companion that succeeds at being scholarly and accessible to lovers of literature,"---Church Times (U.K.). 720 pages, softcover.

▼▲
This Companion explores the Bible's role and influence on individual writers, whilst tracing the key developments of Biblical themes and literary theory through the ages.

▼▲
Rebecca Lemon is an associate professor of English literature at the University of Southern California. She is the author of Treason by Words: Literature, Law, and Rebellion in Shakespeare's England (2006), as well as articles on Mary Wroth and Petrarchism, Shakespeare and Agamben, and Hayward and censorship.

Emma Mason is a senior lecturer in English at the University of Warwick. She is the author of Women Poets of the Nineteenth Century (2006), Nineteenth Century Religion and Literature: An Introduction (with Mark Knight, 2006), and The Cambridge Introduction to Wordsworth (2009), and is co-editor of The Oxford Handbook of the Reception History of the Bible (with Michael Lieb and Jonathan Roberts, 2010).

Jonathan Roberts is a lecturer in English at the University of Liverpool. He is the author of William Blake's Poetry (2007), The Bible for Sinners (with Christopher Rowland, 2008), Blake. Wordsworth. Religion. (2010), and is co-editor of The Oxford Handbook of the Reception History of the Bible (with Michael Lieb and Emma Mason, 2010).

Christopher Rowland is Dean Ireland's Professor of Holy Exegesis at the University of Oxford. He is the author of a number of books, including The Nature of New Testament Theology (2006), Revelation Through the Centuries (with Judith Kovacs, 2003), and Radical Christian Writings: A Reader (with Andrew Bradstock, 2002), all published by Wiley-Blackwell. He is Consultant Editor of The Oxford Handbook of the Reception History of the Bible (edited by Michael Lieb, Emma Mason, and Jonathan Roberts, 2010), and together with John Sawyer, Judith Kovacs, and David Gunn, he also edits the Blackwell Bible Commentary series.

"Probably what comes across most clearly is how, and that, many of the writers chose deliberately to draw on the Bible, and for students increasingly unfamiliar with the Bible, this approach challenges as well as informs." (Reference Reviews)

"An extremely useful volume." (The Year's Work in English Studies)

▼▲
I'm the author/artist and I want to review The Blackwell Companion to the Bible in English Literature.
Back