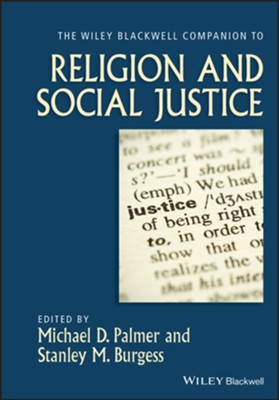 The Wiley-Blackwell Companion to Religion and Social Justice - eBook

▼▲
The Wiley-Blackwell Companion to Religion and Social Justice brings together a team of distinguished scholars to provide a comprehensive and comparative account of social justice in the major religious traditions.

MICHAEL D. PALMER is a professor of philosophy at Regent University. In addition to numerous scholarly articles, book chapters, and reviews, he has published four books, including a two-volume work The Holy Spirit and Social Justice, Interdisciplinary Global Perspectives (2019), coedited with Antipas Harris. Palmer has extensive experience teaching undergraduate and graduate courses in moral theory, social ethics, applied ethics, and philosophy of religion. He has also conducted professional workshops and seminars for educators on topics relating to religion and ethics.

STANLEY M. BURGESS is Professor Emeritus, Missouri State University. In addition to over 150 scholarly articles, he has published numerous books, including the International Dictionary of Pentecostal and Charismatic Movements (2002), the Encyclopedia of Pentecostal and Charismatic Christianity (2004), and Christian Peoples of the Spirit: a Documentary Collection (2011).

“The articles work together to form a comprehensive whole and also to provide an encyclopedic handbook on the topic.  Summing Up: Recommended.  Lower-level undergraduates and above; general readers.”  (Choice, 1 December 2012)

▼▲
I'm the author/artist and I want to review The Wiley-Blackwell Companion to Religion and Social Justice - eBook.
Back
Back