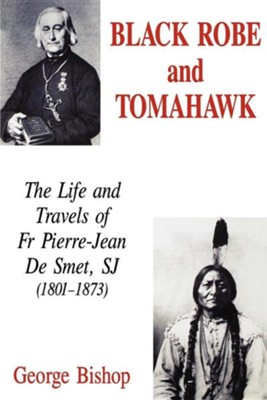 ▼▲
Fr Pierre-Jean De Smet, SJ is one of the most remarkable among the great missionary figures of the Society of Jesus. Born in Belgium, he emigrated to the United States to enter the Jesuit novitiate and was ordained in Missouri in 1837. He founded St Joseph's Mission at Council Bluffs for the Potawatomies in 1838, and visited the Sioux to arrange a peace between that nation and the Potawatomies, the first of his many peace missions. In 1840 he set out for the territory of the Flatheads in the far Northwest, and established St Mary's Mission on the Bitter Root River in Montana, and three years later on the Williamette River in Oregon he opened the most important of a chain of missions covering the Northwest. In 1846 he made peace between the Blackfeet and the Crows. Fr De Smet repeatedly crossed and recrossed the North American Continent, travelling by paddle steamer, raft, and canoe, dogsled and snowshoe, on horseback and in wagons, and for the greater part on foot. His growing influence among the Native American peoples and their leaders induced the United States Government to solicit his help in its dealings with them, and the rest of his life was devoted to promoting their cause in America and in Europe. Fr De Smet assisted at the great Indian Council of 1851 near Fort Laramie, and in 1886, after entering alone into the Sioux camp of warriors led by Sitting Bull, his enthusiastic reception led to a treaty of peace signed by all the chiefs.