Skip to main content
Black Ships Before Troy: A Retelling of the Iliad
By: Rosemary Sutcliff
Stock No: WW94831 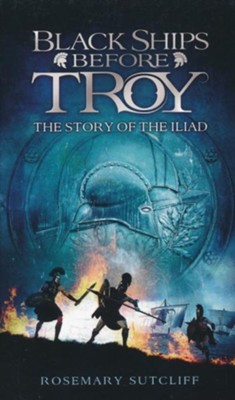 Black Ships Before Troy: A Retelling of the Iliad

▼▲
This re-telling of Homer's Iliad retains all the splendor of Ancient Troy. Legendary Helen, courageous Achilles, Ajax, Odysseus and Hector are all present in their original grandeur as they fight for Helen's--and Greece's--honor. 149 pages, softcover with pronunciation guide.

▼▲
For Greek myth fans, those who can’t get enough of the D'Aulaires' Book of Greek Myths, and readers who have aged out of Rick Riordan, this classroom staple and mythology classic is perfect for learning about the ancient myths!

As the gods and goddesses of Olympus scheme, the ancient world is thrown into turmoil when Helen, the most beautiful woman in all of Greece, is stolen away by her Trojan love. Inflamed by jealousy, the Greek king seeks lethal vengeance and sends his black war ships to descend on the city of Troy.
In the siege that follows, history’s greatest heroes, from Ajax to Achilles to Odysseus, are forged in combat, and the brutal costs of passion, pride, and revenge must be paid. In the end, the whims of the gods, the cunning of the warriors, and a great wooden horse will decide who emerges victorious.
Homer's epic poem, The Iliad, is one of the greatest adventure stories of all time and Rosemary Sutcliff's retelling of the classic saga embodies all of the astonishing drama, romance, and intrigue of ancient Greece.

Don’t miss The Wanderings of Odysseus, the companion to Black Ships Before Troy, and follow Odysseus on his adventure home.

This book has been selected as a Common Core State Standards Text Exemplar (Grades 6-8, Stories) in Appendix B.

▼▲
Rosemary Sutcliff wrote more than 40 historical novels for young adults, including The Wanderings of Odysseus and Black Ships Before Troy, as well as five adult novels, and several books of nonfiction.

▼▲
Praise for Black Ships Before Troy:

"[Sutcliff] brings into vivid focus the mythic story of the Trojan War, with all of its visually dramatic elements&hellip;[and] leaves many of the epic’s powerful metaphors intact."—Publishers Weekly

Praise for The Wanderings of Odysseus:

"[Sutcliff] retells Homer's Odyssey with thrilling drama...The story of the hero's long years of wandering...has the mythic power of everyone's search for home...[and she] fuses epic grandeur with a direct simplicity that will bring the universal story home."—Booklist

"Rosemary Sutcliff has done a great service...by warmly and carefully abridging two classics that many people find difficult to tackle in their original form. Not only has she broken the long tales into tolerable and interesting chapters, she has smoothed out the language while keeping true to all of the original drama and excitement."—Parent Express

"An intimate portrait of a man....Readers will enjoy this classic adventure."—SLJ

▼▲
I'm the author/artist and I want to review Black Ships Before Troy: A Retelling of the Iliad.
Back
Back