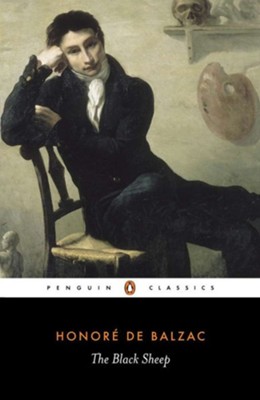 ▼▲
The novel revolves around the contrasting characters of two brothers. Philippe Bridau, the elder, Napoleon's aide-de-camp at the battle of Montereau, had a brief but glorious career in the army before the fall of the Emperor. A handsome and dashing figure, although now with no prospects, he is still more popular than his younger brother, Joseph, a man of less adventurous spirit whom his mother considers a shiftless, good-for-nothing artist. As in other novels in the Comedie humaine, to be without money is to be without power, almost without life itself; and in The Black Sheep it is a struggle to recover the family inheritance that entangles the two young men. In a hostile society in which you must kill to avoid being killed, deceive to avoid being deceived, the true nature of each brother gradually emerges.

▼▲
His elegantly-crafted tale of sibling rivalry, Honor&eacute; de Balzac's The Black Sheep is translated from the French with an introduction by Donald Adamson in Penguin Classics. Philippe and Joseph Bridau are two extremely different brothers. The elder, Philippe, is a superficially heroic soldier and adored by their mother Agathe. He is nonetheless a bitter figure, secretly gambling away her savings after a brief but glorious career as Napoleon's aide-de-camp at the battle of Montereau. His younger brother Joseph, meanwhile, is fundamentally virtuous - but their mother is blinded to his kindness by her disapproval of his life as an artist. Foolish and prejudiced, Agathe lives on unaware that she is being cynically manipulated by her own favourite child - but will she ever discover which of her sons is truly the black sheep of the family? A dazzling depiction of the power of money and the cruelty of life in nineteenth-century France, The Black Sheep compellingly explores is a compelling exploration of the nature of deceit. Donald Adamson's translation captures the radical modernity of Balzac's style, while his introduction places The Black Sheep in its context as one of the great novels of Balzac's renowned Com&eacute;die humaine.

▼▲
The son of a civil servant, Honor&eacute; de Balzac was born in 1799 in Tours, France. After attending boarding school in Vend&ocirc;me, he gravitated to Paris where he worked as a legal clerk and a hack writer, using various pseudonyms, often in collaboration with other writers. Balzac turned exclusively to fiction at the age of thirty and went on to write a large number of novels and short stories set amid turbulent nineteenth-century France. He entitled his collective works The Human Comedy. Along with Victor Hugo and Dumas p&egrave;re and fils, Balzac was one of the pillars of French romantic literature. He died in 1850, shortly after his marriage to the Polish countess Evelina Hanska, his lover of eighteen years.

▼▲
I'm the author/artist and I want to review Black Sheep.
Back