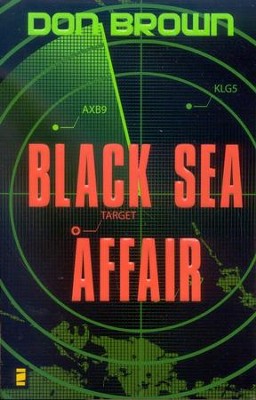 ▼▲
Navy Commander Pete Miranda is chosen to lead a top-secret military operation to sneak a U.S. submarine into the Black Sea. His mission: to sink a rogue Russian freighter carrying stolen nuclear fuel. The attack brings the world to the verge of nuclear holocaust. The Black Sea Affair is one of the most dangerous games of brinkmanship since the Cuban Missile Crisis.

As the U.S. Navy searches for weapons-grade plutonium that has been smuggled out of Russia by terrorists, a submarine mishap escalates the international crisis. JAG Officer Zack Brewer is called on to defend American submarine skipper Miranda and his crew at a military tribunal in Moscow. It is a heart-stopping race against the clock.

▼▲
It’s a mission that could bring the world to the brink of nuclear war. Now time is running out.It starts with a high-stakes theft: weapons-grade plutonium is stolen from Russia. The Russian army is about to attack Chechnya to get it back. But U.S. intelligence discovers that the stolen shipment is actually on a rogue Russian freighter in the Black Sea. It turns into a global nightmare: a secret mission gone awry; an American submarine commander arrested and hauled before a military tribunal in Moscow; and a game of brinksmanship so dangerous that war might be its only possible conclusion.As the U.S. Navy searches for weapons-grade plutonium that has been smuggled out of Russia by terrorists, a submarine mishap escalates the international crisis. With the world watching, JAG Officer Zack Brewer is called to Moscow to defend submarine skipper Pete Miranda and his entire crew. It is a heart-stopping race against the clock. With Russian missiles activated and programmed for American cities, Brewer stalls for time as the U.S. Navy frantically searches the high seas for a floating hydrogen bomb that could threaten New York Harbor.

▼▲
In Black Sea Affair, Don Brown weaves an intense, action-packed tale that gives flesh to Matthew 24:7s prediction that in the latter times, Nation will rise against nation. A group of terrorists has just stolen enough weapons-grade plutonium to wipe out a fairly large chunk of land and end the lives of millions. The Russians are convinced that the plutonium is hidden somewhere in Chechnya, but U.S. intelligence believes that the plutonium is aboard a Russian freighter in the Black Sea.

When a misunderstanding resulting from a lie causes Russia to believe that American fighter planes have shot into Russian territory and taken down two of their MiGs, tensions rise between Russia and America. Tensions reach a whole new level when a U.S. sub, the USS Honolulu, sinks a seemingly civilian Russian freighter. The fact that there were children aboard the freighter doubles Russias fury, and it sends a large portion of its own submarines and armed helicopters to take out the USS Honolulu. A war breaks out undersea with the Russians unaware that the children whose lives they are seeking revenge for are aboard the USS Honolulu. Should the commander of the USS Honolulu, Pete Miranda, decide to surrender his ship for the sake of the children, he would be putting his crew and himself at the mercy of an unfair trial. When Miranda is offered the chance to have a lawyer from the U.S. represent his case, President Williams sends Americas very best. Can JAG officer Zack Brewer influence the release of the crew of the U.S. sub? Will America be able to find the true location of the plutonium before the entire crew of the USS Honolulu is sentenced to death?

Black Sea Affair is emotional and captivating. The fate of many lives rests in the decisions of a few men. With every character under pressure, one misstep could result in a nuclear war. Isaiah says that justice will bring light to the nations, and this novel shows that those willing to do right, to trust God, and to live honorably will face difficulties, but they will never have to be ashamed of their deeds or character. I would recommend Black Sea Affair to fans of suspense and action. -- Christa Mullen, www.ChristianBookPreviews.com

▼▲
I'm the author/artist and I want to review Black Sea Affair, Naval Justice Series #4.
Back
×
Back
×