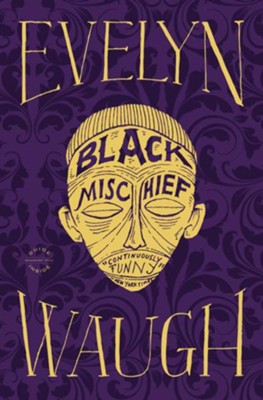 ▼▲
"A hilarious and still timely tale of emerging Africa and declining England" (Time), Evelyn Waugh's third novel helped to establish his reputation as a mater satirist.
"We are Progress and the New Age. Nothing can stand in our way." When Oxford-educated Emperor Seth succeeds to the throne of the African state of Azania, he has a tough job on his hands. His subjects are ill-informed and unruly, and corruption, double-dealing, and bloodshed are rife. With the aid of Minister of Modernization Basil Seal, Seth plans to introduce his people to the civilized ways of the West--but will it be as simple as that?
Profound hilarity ensues from the issuance of homemade currency, the staging of a "Birth Control Gala," the rightful ruler's demise at his own rather long and tiring coronation ceremonies, and a good deal more mischief.

▼▲
Evelyn Waugh (1903-1966), whom Time called "one of the century's great masters of English prose," wrote several widely acclaimed novels as well as volumes of biography, memoir, travel writing, and journalism. Three of his novels, A Handful of Dust, Scoop, and Brideshead Revisited, were selected by the Modern Library as among the 100 best novels of the twentieth century.

▼▲
"Continuously funny."—New York Times
"A hilarious and still timely tale of emerging Africa and declining England."—TIME
"Pure, early Waugh, funny in spots, mildly satirical, wildly absurd, corrupt and erotic....Black Mischief is clever and it is entertaining."—Orville Prescott, New York Times
"To achieve greatness, in the opinion of this devotee of the genre, satire must be rooted not only in a genuine love for the object being satirized but also in an awareness of the object's relation to the entire human condition, regardless of race, color, creed, or geography. Black Mischief, it seems to me, does this to a larger degree than any of the half-dozen near-great pieces of satire written in English in my time, all of them, by the way and by a not-so-odd coincidence, composed by the same Mr. Waugh."—Jerome Weidman, New York Herald Tribune

▼▲
I'm the author/artist and I want to review Black Mischief - eBook.
Back
Back