Skip to main content
SPRING CYBER EVENT STARTS NOW: And it's a really BIG deal! Up to 88% off through 5/24>
Black Fire: One Hundred Years of African American Pentecostalism
By: Estrelda Y. Alexander
Stock No: WW825868 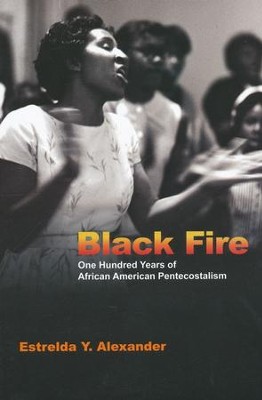 ▼▲
Estrelda Alexander was raised in an urban, black, working-class, oneness Pentecostal congregation in the 1950s and 1960s, but she knew little of her heritage and thought that all Christians worshiped and believed as she did. Much later she discovered that many Christians not only knew little of her heritage but considered it strange. Even today, most North Americans remain ignorant of black Pentecostalism.


Whether you come from an African American Pentecostal background or you just want to learn more, this book will unfold all the dimensions of this important denomination's history and contribution to the life of the church.

▼▲
Estrelda Alexander was raised in an urban, black, working-class, oneness Pentecostal congregation in the 1950s and 1960s, but she knew little of her heritage and thought that all Christians worshiped and believed as she did. Much later she discovered that many Christians not only knew little of her heritage but considered it strange. Even today, most North Americans remain ignorant of black Pentecostalism. Black Fire remedies lack of historical consciousness by recounting the story of African American Pentecostal origins and development. In this fascinating description she covers Whether you come from an African American Pentecostal background or you just want to learn more, this book will unfold all the dimensions of this important movement's history and contribution to the life of the church.

Estrelda Y. Alexander (Ph.D., The Catholic University of America) is a visiting professor of theology in the School of Divinity at Regent University in Virginia Beach, Virginia, and executive director of the William Seymour Educational Foundation.

▼▲
Dr. Alexander has gathered the major, minor, profound and pedestrian aspects of African American Holiness-Pentecostalism in a volume that seeks to provide a Rosetta stone for scholars, students, denominational historians and the general public. She is clear to state that this work is an endearing labor of love to articulate her experience as an African American Pentecostal worshiper, scholar and minister. This volume is the seedbed of a crop of readable studies in African American Holiness-Pentecostal history, theology and culture. A worthy investment in understanding the why, who, what and how of a century-old community of denominations linked to the book of Acts and 312 Azusa Street. Kudos!
-Dr. Ida E. Jones,
historian, Calvary Bible Institute and Moorland Spingarn Research Center, Howard University, Washington, D.C.

Black Fire offers an expansive historical overview of African American Holiness-Pentecostals and their often overlooked contributions to the early development, dissemination and current vitality of the modern Pentecostal movement from its inception to the present. Students and scholars of African American religion and culture will appreciate its rich content, as well as its nuanced attention to matters of race, class, gender and generation.
-Karen Kossie-Chernyshev,
Ph.D., professor of history, Texas Southern University, Houston, Texas

Pentecostalism is one of the most vibrant and important developments in modern Christianity. In this welcome and much-needed book, Estrelda Y. Alexander demonstrates convincingly that this global work of the Spirit has to a large extent emerged from and continues to be fanned into flame by the African American community. Outsiders who think a few more controversial variations of 'black fire' sometimes look like 'strange fire' will be glad to learn that the African American church has able internal critics of its own outliers. Every Christian--indeed, everyone interested in the present and future of Christianity--needs to know this story.
-Timothy Larsen,
McManis Professor of Christian Thought, Wheaton College

This particular book is especially welcome. African American Pentecostals have become a major force in American (and world) Christianity, but there is a serious lack of well-documented studies. Estrelda Alexander does an excellent job filling that lamentable gap.
-Mark Noll,
Francis A. McAnaney Professor of History, University of Notre Dame


Alexander, pastor and an associate professor of practical theology at Virginia's Regent University, has penned an exhaustive history of black Pentecostalism from its origins at the Azusa Street Revival (in L.A.)in 1906 (overshadowed by a massive earthquake in San Francisco the same year) to its contemporary manifestations in the churches of T.D. Jakes, Atlanta's recently controversial Eddie Long, and prosperity gospel preacher Creflo Dollar. The details and nuances of the centurylong span the book covers come alive when familiar names are addressed, but significant portions of the exposition are tedious and difficult to read. Some of the preacher and leader profiles highlighted in the smaller branches of Pentecostalism are revealing, but the schisms between trinitarian and oneness doctrines, along with the repetition of the emphasis on speaking in tongues, make for overly dense theological analysis. For a charismatic movement with so many colorful characters, this massive volume is more encyclopedic than dynamic. It is, however, as important and thorough as it is difficult to read. (June) Copyright 2011 Reed Business Information.

"This book will provide its readers with a valuable overview of important monuments and figures from the past one hundred years. It presents a straightforward account of how African American Pentecostalism developed and changed over time. Because of the scope of this work, it will be helpful for general audiences who want to learn more about this topic or for use in an undergraduate course."

" Black Fire provides a much-needed narrative that completes, and at times corrects, the general histories of both American Christianity and the Pentecostal and charismatic movements."

▼▲
I'm the author/artist and I want to review Black Fire: One Hundred Years of African American Pentecostalism.
Back
Back