Skip to main content
OUR BIGGEST BARGAIN SALE EVER: Over 6,000 deals at never-seen-before prices ~ through 8/23. Shop now >
The Black Swan Effect: A Response to Gender Hierarchy in the Church
By: Felicity Dale
Stock No: WW300187 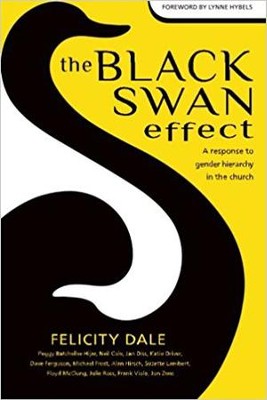 The Black Swan Effect: A Response to Gender Hierarchy in the Church

▼▲
The Black Swan Effect presents a vision for what can happen as men and women work together in the Kingdom of God. The authors (14 men and women) encourage men to champion women as equal co-laborers and partners in the harvest. They give women permission and inspiration to follow the Lord - to reach their own full potential and encourage others to fulfill God's call. The Black Swan Effect equips both men and women to bring an informed and positive contribution to the increasingly crucial conversation on gender in the church.

The enduring sidelining of women exists in the contemporary church because so many are convinced that this is the way it is supposed to be - that it is a biblical mandate, a divine commitment to a patriarchal order. The notion of women leading, preaching, and planting churches is still unheard of in many corners of Christendom. The idea of Christian women fulfilling the mission of the gospel on their own without the permission or leadership of men seems about as likely as a flock of black swans flocking into a church yard.

In sixteenth-century England, the term "black swan" described something that could not possibly exist. Everyone knew that swans were white, not black; you might as well believe in unicorns. But then a Dutch explorer in Australia discovered the indiscoverable: black swans did exist, and not as an aberration of nature.

The term "black swan" was reinvented after this discovery. It is now used in reference to a surprise event that has a major effect. Economists use the term to refer to events that we don't expect, such as the global recession of 2008. When reality unravels ideas we once believed to be true, this is the "black swan effect." Such is the premise of the new book, The Black Swan Effect: A Response to Gender Hierarchy in the Church, by Felicity Dale.

Dale, a leader in the missional house church movement, brought together a group of female leaders for mutual encouragement. They were deeply concerned about gender inequality in Christianity, and decided to write a book, inviting male leaders to join them. Contributors to The Black Swan Effect include writers such as Floyd McClung, Neil Cole, Frank Viola, Michael Frost, and Katie Driver. The combined perspectives of these leaders of the missional church movement make a compelling case for the full inclusion of women in the church.

Dale writes that the body of Christ is like a hemiplegic (paralyzed on one side of the body) bride. The main theme throughout The Black Swan Effect is the call to liberate the female half of the body of Christ from the grip of complementarianism in order to fulfill the Great Commission. The Black Swan Effect emphasizes the need for all women to be on mission for the kingdom of God, and with this in mind Dale and her co-authors provide history, theology, and stories to help the reader consider the wisdom and biblical perspective of mutuality between the sexes.

In the preface, Dale explains that men were invited to join the writing project for several reasons, including a desire to avoid looking like a group of militant feminists "griping about the way we've been treated and grasping for our rights." This made me cringe a bit. Any time an oppressed person speaks up - and let's be clear, Christian women have long experienced oppression - it is common for those in power to admonish the oppressed to be content with the status quo. I am grateful for the women who before me did not remain quiet and risked being misunderstood. Collaborating with brothers in Christ on this book project is a wise strategy, I agree. Many times, however, a woman will need to break rank and risk being misinterpreted in order to be the person she is meant to be.

I like this book, despite Dale's caution to avoid being seen as a militant feminist. The pace and writing are engaging, providing readers a basic biblical grounding of an egalitarian view, but without being a heavy-laden academic book. And each chapter ends with questions that facilitate discussion in a group setting. I was heartened to read that all proceeds from sales are designated to training women church planters in developing nations and also to help victims of sex trafficking.

It is clear to many that the holy winds of change are gusting up around the globe as women break free from the grip of gender inequality. The Black Swan Effect is a prophetic collective of writers who are committed to helping the contemporary church discover the outrageous reality of the leadership and spiritual authority of women alongside men.

---Pam Hogeweide, author and blogger
---Used with permission from Christians for Biblical Equality

▼▲
I'm the author/artist and I want to review The Black Swan Effect: A Response to Gender Hierarchy in the Church.
Back