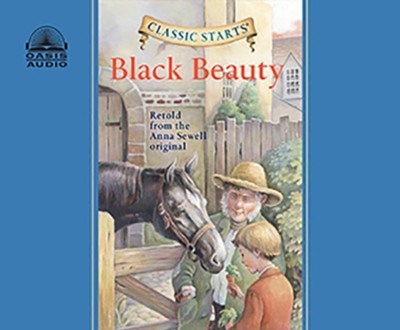 Black Beauty is the classic horse story, a beautiful and touching tale told by the title character himself. Set in Victorian London, it follows Beauty's life and changing fortunes as he moves from owner to owner. As the horse encounters new experiences and new friends who reveal their own histories, the story quietly paints a fascinating portrait of how animals were treated during that era.

▼▲
Anna Sewell, March 30, 1820 - April 25, 1878 Anna Sewell was on March 30, 1820 in Yarmouth, Norfolk, England. She was raised a Quaker by her father a bank manager and her mother, a children's novelist. At the age of fourteen, Sewell hurt her knee during a fall and the injury never healed right. Even though she could not walk well, she could still ride horses and drive a horse drawn buggy. It was this form of freedom that sparked her concern for the welfare of horses. She wrote "Black Beauty" when she was in her fifties, but died a year after it was published in 1877. While she never earned much from the book while she was alive, after her death, the novel snowballed into a something extraordinary. The book was about the abuses horses sustained in their lifetimes, but was told from the unique viewpoint of the horse. Even though the book was intended for children, it impacted all generations and caused everyone who read it to take a look at the inhumane treatment horses received. In the one hundred plus years since "Black Beauty" had been published, over 30 million copies have been printed. At least eight motion pictures have been made based on the novel and it is a well known children's classic. Anna Sewell died on April 25, 1878 in Old Catton, Norfolk.

▼▲
I'm the author/artist and I want to review Black Beauty, Unabridged Audiobook on CD.
Back
×