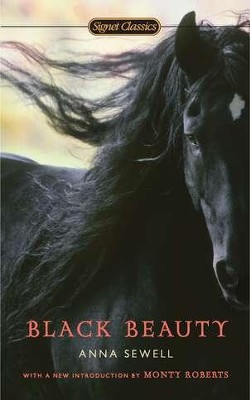 ▼▲
One of the best loved animal stories ever written, the dramatic and heartwarming Black Beauty is told by the magnificent horse himself, from his idyllic days on a country squire's estate to his harsh fate as a London cab horse. No one can ever forget the gallant Black Beauty, a horse with a white star on his forehead and a heart of unyielding courage.

▼▲
Discover the classic story of a beautiful horse with an unbreakable spirit.

One of the best loved animal stories ever written, the dramatic and heartwarming Black Beauty is told by the magnificent horse itself, from idyllic days on a country squire's estate to a harsh fate as a London cab horse. No one can ever forget the gallant Black Beauty, a horse with a white star on its forehead and a heart of unyielding courage.

Filled with vivid anecdotes about animal intelligence, the novel derives a special magic from the author's love for all creatures, apparent on every page. But the book's lasting impact comes from its moving depiction of a human society struggling to find the goodness within itself, and its pleas for kindness to all creatures, great and small—a message so powerful that this favorite classic began a crusade for animal rights that continues today.

▼▲
Anna Sewell was born in Great Yarmouth, Norfolk, England, on March 30, 1820. Brought up in a strict Quaker family, Anna developed a strong interest in horses as a young girl. But a crippling bone disease and a fall in 1834 left her an invalid for most of her life. By her mid-thirties she was severely lame and could only get around in a pony cart, and characteristically she would never use a whip on the animal. In 1871, she was told she had eighteen months to live, and by the end of that year, she had begun her book, Black Beauty, hoping it might make people a little kinder to their faithful horses. Although she was seriously ill, she lived long enough to finish her book and see it published in 1877. On April 25, 1878, she died at her home in Old Catton near Norwich, England. Black Beauty, an enormous success from its first appearance, was soon adopted by the Society for Prevention of Cruelty to Animals and used to improve the conditions of horses everywhere.

▼▲
I'm the author/artist and I want to review Black Beauty.
Back
Back