We are OPEN and SHIPPING - click here for shipping estimates
PRE-SUMMER CYBER SALE EXTENDED thru 6/1 ~ Over 2,500 items up to 90% off
Bits and Pieces
By: Judy Schachner 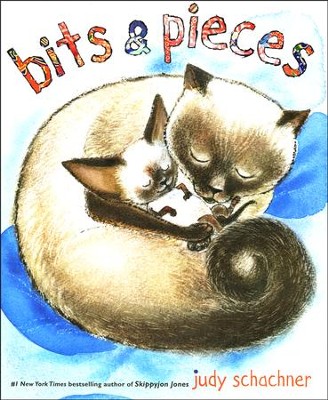 ▼▲
Tink is an indoor cat who dreams of finding some outdoor adventure. It takes years of trying, but one day Tink manages to make his way outside for a nice little stroll until he discovers that he is lost! Will Tink make it back to his family, who loves him to Bits and Pieces?

Tink has everything he ever wanted – delicious treats, hugs and kisses, and even a kitten to raise. The only thing missing is wild outdoor adventure. So when the opportunity arises, Tink sneaks out – and becomes an outdoor cat for one unforgettable night.

Like cozy favorites such as Clare Turlay Newberry's Marshmallow and Mo Willems' City Dog, Country Frog, and with soft, meltingly tender illustrations that match the poignant tale, Judy Schachner proves what a superlative storyteller she is with this loving family story.

▼▲
Known for her bestselling Skippyjon Jones series, Judy Schachner also wrote and illustrated the much-loved Grannyman, which won the Nebraska Golden Sowers Award, and several other books.  She lives in Swarthmore, Pennsylvania, with her family and cats. Tink, one of her cats, served as the inspiration for this story.

▼▲
“Delightful from start to finish.” - The New York Times

"Fans of Schachner’s Skippyjon Jones series should lap this one up." - Booklist

"Schachner’s warm prose and mixed-media artwork overflow with affection for both Tink and the SkippyJon-lookalike “little friend” who joins the family." - Publishers Weekly

"Another charming slice-of-(real)-life story from veteran author/illustrator Schachner that will particularly please fans of The Grannyman...
Fellow cat fanciers will appreciate Schachner’s low-key tale and share her unabashed love for her furry friend." - Kirkus Reviews

"The author’s fans and cat lovers will relate to the story of the feline’s antics and the satisfying resolution." - School Library Journal

"Schachner’s narrative is gently amusing and carefully constructed, with occasional alliteration giving the text an almost lyrical quality...Am I recommending it? Yes, Siam." - Bulletin of the Center for Children's Books

Praise for the Skippyjon Jones series:

"The playfulness of Schachner’s stories is echoed in her artistic style — dynamic and comic sketches, a wide palette of lively colors in acrylic and pen and ink, and an alphabetical mélange of handwritten and printed letters..." - New York Times review of the Skippyjon Jones series

▼▲
I'm the author/artist and I want to review Bits and Pieces.
Back
×
Back
×