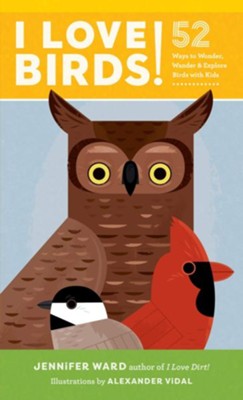 I Love Birds!: 52 Ways to Wonder, Wander, and Explore Birds with Kids

▼▲
Prowl for owls by ear, discover the science of feathers, and become familiar with the birds in your neighborhood and beyond—52 activities for kids ages 4 to 8

Calling all birders! It’s time to share the joy of birds with the kids in your life. I Love Birds! is chock-full of activities, information, and rich resources that will fuel discovery and inspire families. Through sensory, hands-on, and creative explorations that involve birding basics and the hows and whys of bird behavior, the activities here will engage children’s imagination and sense of wonder as they observe birds in the wild, become citizen scientists, and forge a deeper understanding, appreciation, and stewardship toward nature, our planet, and all things feathery.

▼▲
Jennifer Ward is the author of numerous children’s books, all of which present nature to kids. Her award-winning titles have been featured in magazines such as Ranger Rick, Your Big Backyard, Learning, and Foreword, and she has been interviewed and featured on national television and local radio. She is a regular speaker at conferences and schools across the country, where she instills the importance of literacy and the wonders waiting to be discovered in the natural world.


Prior to becoming an illustrator and designer, Alexander Vidal studied anthropology, taught elementary school, and worked as a wildlife education specialist at the Los Angeles Zoo. He graduated from the Art Center College of Design, where he studied illustration. As an illustrator, Alexander has worked with clients including the California Academy of Sciences, The Sierra Club, The Monterey Bay Aquarium, Smithsonian Magazine, and the National Wildlife Federation. Alexander is the illustrator of So Many Feet, Los Angeles Is... and the forthcoming Wilds of America. Learn more about Alexander Vidal and his books at www.alexandervidal.com.

▼▲
"Jennifer Ward’s I Love Birds! Is a fantastic book to get kids interested in wild birds and the natural world all around them."—Dave Mizejewski, spokesperson for the National Wildlife Federation

"Kids will be captivated by the outdoor experiences in I Love Birds! It’s a perfect fit for parents and teachers looking for ways to engage children in STEM activities."—Amy Weeks, director, St. Louis Audubon Society

"Ward has considered everyobstacle in helping readers jump right into birding, whether they have a few minutes free or an entire day. A lifetime love of nature is contagious, a feeling Ward captures perfectly. This is sure to become a favoriteof caregivers, parents, teachers, naturalists, and, of course, children."—Booklist

▼▲
I'm the author/artist and I want to review I Love Birds!: 52 Ways to Wonder, Wander, and Explore Birds with Kids.
Back