Skip to main content
Birds of Pray
By: Rob Maaddi
Stock No: WW355855 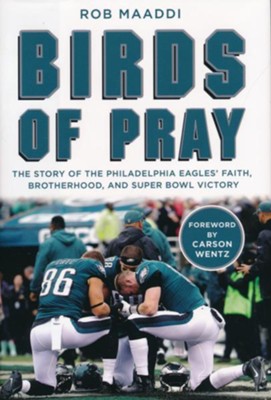 ▼▲
In Super Bowl 2018, the Philadelphia Eagles were the underdogs with the championship New England Patriots towering over them. Yet the faith of the Christian players never wavered! Sharing exclusive interviews, newly published photos, and insider accounts, Maaddi reveals the team members' relentless reliance on Christ, who gives us all strength in moments of crisis and celebration. 224 pages, hardcover from Zondervan.

They were the first No. 1 seed in NFL history to enter the playoffs as an underdog. Their star quarterback was out with a season-ending knee injury. Five-time Super Bowl champions the New England Patriots towered over them. But public opinion didn't matter to the Philadelphia Eagles. They believed in each other. The band of Christian brothers on the team believed in the God of the impossible, and they played for an audience of One.

The most extensive book to explore the Christian faith shared by many of the team's players, Birds of Pray details the incredible inside story behind the Eagles' capture of the biggest prize in professional sports: the Vince Lombardi Trophy. Through exclusive interviews with the players, never-before-seen photos, and insider accounts of the miracle season's most memorable moments, Philly native and Associated Press sportswriter Rob Maaddi reveals a side of the team the world has yet to fully witness.

From an impromptu baptism in the team's cold tub to weekly Bible studies and pre-game prayers, to the unique friendship between star quarterback Carson Wentz and back-up-then-MVP Nick Foles - the Eagles excel in the unexpected. Birds of Pray follows the deep faith shared among players, the high stakes they faced together, and their relentless reliance on Christ who gives all strength in moments of crisis and celebration alike. The result is a boldly inspiring, entertaining read that will challenge readers to go deeper in their faith, dream bigger, and live with renewed courage for whatever odds life stacks against them.

Rob Maaddi is an author, radio and television personality and dynamic speaker who has covered Philadelphia sports for The Associated Press since 2000. A passionate Christian devoted to spreading the Gospel, Rob launched "Faith On The Field Show" on Philadelphia's 610 ESPN radio in April 2017. Rob has written or co-written seven other books. Rob and his wife, Remy, have twin daughters: Alexia and Melina.

▼▲
I'm the author/artist and I want to review Birds of Pray.
Back
Back