Skip to main content
NEW CYBER DEALS Save up to 90% thru 12/12  shop now >
Four Birds of Noah's Ark: A Prayer Book from the Time of Shakespeare
Edited By: Robert Hudson
By: Thomas Dekker
Stock No: WW874818 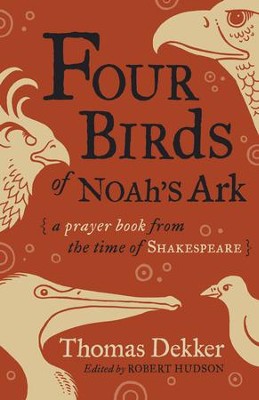 Four Birds of Noah's Ark: A Prayer Book from the Time of Shakespeare

▼▲
When the Black Death ravaged London in 1608, Elizabethan playwright Thomas Dekker penned these 56 prayers representing the feelings of people from every level of society---miner to new mother, lawyer to queen. You'll relish the vivid portraits, beautiful language, and irrepressible deep-seated spirituality. Paperback with French flaps.

A timeless, little-known literary classic to engage a new generation of readers

As the Black Death ravaged London in 1608, in the midst of societal chaos and tragedy, playwright Thomas Dekker wrote Four Birds of Noah’s Ark, a book containing fifty-six prayers for the people of London and all of England.

The prayers in this book bear witness to Dekker’s deep faith with a power and poignancy that few written prayers in English literature achieve. Bringing Dekker’s devotional classic back into print for the first time since 1924, editor Robert Hudson has annotated the prayers and modernized their language without sacrificing their enchanting beauty and simplicity. Hudson’s substantive and illuminating introduction is a gem in itself.

▼▲
Karen Swallow Prior
— author of Booked: Literature in the Soul of Me
"In an age of extemporaneous prayers, it is instructive and delightful to read prayers created within the word-rich age of the English Reformation and wrought with such care. Beautifully crafted, filled with human goodness and biblical truth, these are more than prayers: they are meditations, devotions, and little lessons on what it means to be human and utterly dependent upon God. This is a volume I will return to again and again."

Carol Zaleski
— coauthor of Prayer: A History and The Fellowship: The Literary Lives of the Inklings
"Happy the reader who discovers this prayer book by Thomas Dekker, the Elizabethan playwright who probably spent more time in debtors’ prison than in church but learned from both how to read the human heart. Dekker’s prayers for children, mothers, laborers, rulers, prisoners, sailors, miners, plague sufferers, reformed rogues, and all who hope for redemption—gently modernized and engagingly introduced by Robert Hudson—make a rich collection of praise, petition, lament, and thanksgiving wrapped up in an irresistible wit."

John Wilson
— founding editor of Education & Culture
"Robert Hudson has discovered the literary equivalent of buried treasure—in this case, lying hidden in plain sight—and brought it to light for our instruction and delight. Many thanks!"

Jill Pel&aacute;ez Baumgaertner
— Wheaton College
"Even though Thomas Dekker lived four hundred years ago, the prayers he wrote in this compelling collection strongly resonate with twenty-first-century life and concerns, even while presenting vivid pictures of lives and times remote from our own. . . . Out of print for almost a century, Four Birds of Noah’s Ark is a jewel that will not be hidden any longer."

Scott Cairns
— author of The End of Suffering: Finding Purpose in Pain and Slow Pilgrim: The Collected Poems
"By bringing back into view the curious Thomas Dekker and his practice of prayer, Robert Hudson has recovered and has made manifest for us a great treasure. Dekker’s prayer life is one duly understood as a path proceeding from grace to grace; the journey is as freeing of the soul as it is efficacious in enhancing the uncommon intimacy—the increasing unity—between the one who prays and the one who hears the prayer. May this book be blessed."

▼▲
I'm the author/artist and I want to review Four Birds of Noah's Ark: A Prayer Book from the Time of Shakespeare.
Back
Back