We are OPEN and SHIPPING - click here for shipping estimates
PRE-SUMMER CYBER SALE EXTENDED thru 6/1 ~ Over 2,500 items up to 90% off
Like a Lone Bird on a Roof: Animal Imagery and the Structure of the Psalms
By: Tova L. Forti 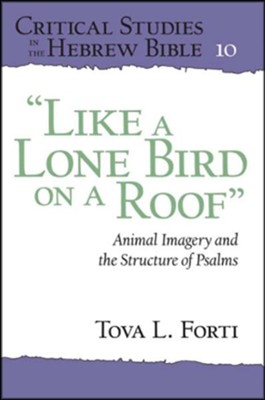 Like a Lone Bird on a Roof: Animal Imagery and the Structure of the Psalms

In this volume, Tova Forti shows how investigation of the poetics of the animal kingdom can elucidate the effect metaphors exert on psalmodic theology. The focus herein on the faunal imagery in Psalms—the literary perception of the animals adduced and the structural and stylistic rhetorical features of the imagery—serves as a lens through which the reader can perceive the poetic dynamics and their impact upon and interaction with the psalm as a prayer.

Forti pays particular attention to the contextual meaning and cultural environment of animal imagery to show how faunal images are used in the formulation and communication of didactic truths and principles regarding human behavior. These depictions can occasionally function as imitato animalis by imbuing animals with human characteristics of language, thought, and empathy, animal life in order to illustrate basic moral precepts.

This volume focuses upon two principal poetical devices—refrains and secondary interpolations—in which animal imagery in the Psalms is often employed as a stage-setting device. A literary analysis of the structure of the psalms in which this faunal imagery is employed reveals the figurative and symbolic impact of this particular domain upon the poetic texture of each psalm. This methodology has diachronic consequences, demonstrating that both poetical devices may function as means of composition in the ongoing process of creating liturgy.

▼▲
I'm the author/artist and I want to review Like a Lone Bird on a Roof: Animal Imagery and the Structure of the Psalms.
Back
×