We are OPEN and SHIPPING - click here for shipping estimates
PRE-SUMMER CYBER SALE EXTENDED thru 6/1 ~ Over 2,500 items up to 90% off
Binding the Strong Man
By: Archbishop Nicholas Duncan-Williams 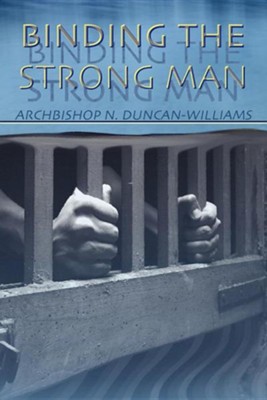 ▼▲
In these end times. the forces of darkness have intensified their attacks against the body of Christ. The enemy has enforced his will over families and communities for centuries through an elaborate system, but the time has come for the Body to fight back This book will show you how to dethrone master spirits that are responsible for enforcing generational curses and negative bloodline patterns. You will also learn how to effectively locate your opponent and 'take him out' by spiritual mapping. Through many years of experience in spiritual warfare, the Archbishop will teach you to how to access the strategies of Satan and pray them to non-effect through diligent intercession. There are evil forces at work but you can learn how to strategically deal with your opponent. Loose your family and community from satanic hands and bind the strong man in your life With three decades of Ministry behind him, Archbishop Nicholas Duncan-Williams is the Presiding Archbishop and General Overseer of Christian Action Faith Ministries (CAFM). CAFM has over 150 affiliate and branch churches located in North America, Europe, Asia and Africa. Archbishop Duncan-Williams is also the Founder and President of Prayer Summit International and Global Prayer Invasion, which bring the message and the power of prayer to many around the world. With a unique anointing in the area of prayer and intercession, Archbishop has been recognized by many leaders in the body of Christ as the "Apostle of Strategic Prayer." Having gained accreditation and respect by various church leaders, God has used him to counsel and speak into the lives of world leaders, while still maintaining his touch with the common man. He is affectionately called "Papa" by many.

▼▲
I'm the author/artist and I want to review Binding the Strong Man.
Back
×