We are OPEN and SHIPPING - click here for shipping estimates
PRE-SUMMER CYBER SALE: Shop over 2,500 items up to 90% off through 5/26 >

Billy Graham: Just Get Up Out of Your Seat
By: Catherine Mackenzie 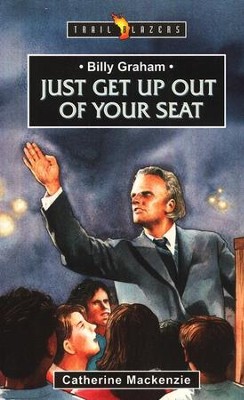 Billy Graham: Just Get Up Out of Your Seat

▼▲
Billy Graham is one of the greatest evangelists of all time; discover what his life was like, his calling, and what made him so determined to give the glory to God in everything. 143 pages, softcover, with timeline.

Billy was born on a dairy farm in Charlotte, North Carolina in 1918 just days after the signing of the armistice that ended the first world world war. At the age of sixteen Billy Graham came to Christ during a Christian revival meeting and it wasn't long before he felt the call to preach.

With the help of his wife Ruth and many other friends and colleagues Billy Graham set out to preach to the world. The Billy Graham Evangelistic Association was founded and since that day Billy has preached to over 80 million people in more than 185 countries. Millions more have been reached through television, video, film and webcasts. He has founded newspapers; film companies, magazines and radio ministries.

Communism and Apartheid, Segregation and Terrorism - Billy Graham has faced up to all Christianity's major opponents of the twentieth century. From playing the bail money to get Martin Luther King out of jail to addressing the memorial service in Washington after the colapse of the World Trade centre, Billy Graham has been there for people with practical help and a message of hope that is timeless.

Billy Graham: "Yes Sir, take me to the cross, I can find my way from home from there"

▼▲
Catherine MacKenzie has written several biographies for young teens in the Trailblazers series as well as other titles for younger children. She is Editor for Christian Focus’ children’s imprint, CF4Kids. Born and brought up in Scotland, her writing was inspired by her mum, children’s author Carine MacKenzie. Catherine has several nieces and nephews – a perfect practice audience!

"Billy Graham is the most effective world evangelist we have had since the New Testament Apostles.
Thank you Catherine for the careful research and animated writing put into this inspiring story of our time"

"Catherine balances knowledge of the subject well with personal anecdotes that make the characters come to life. It also makes you want to praise God for them. If you were teaching about famous Christians or wanted to challenge young people about what God could do with their life these would be ideal. Questions at the back of each chapter are helpful for class or group study. The ‘how to become Christian' section at the back is a vital inclusion."

▼▲
I'm the author/artist and I want to review Billy Graham: Just Get Up Out of Your Seat.
Back
×