The Life of Billy Kim: From Houseboy to World Evangelist - eBook
By: Billy Kim 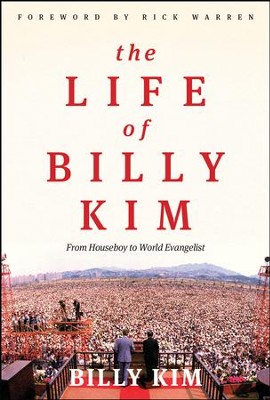 The Life of Billy Kim: From Houseboy to World Evangelist - eBook

Billy Kim was plucked out of poverty and obscurity during wartime in Korea by what could only have been chance—or a miracle. Picked seemingly at random by an American GI to be the houseboy for their barracks in Korea, sixteen-year-old Billy began the path that would bring him to school in America. Later he would go on to be the translator for Billy Graham’s 1973 crusade, a preacher to millions, and an influential global leader for the spread of the gospel. He has been aptly described as the Billy Graham of Asia.

The Life of Billy Kim is the story of how God’s work has been revealed in this one man’s life. For anyone looking for guidance as they serve the Lord, Billy Kim’s life will be a powerful inspiration of providence in a surrendered life.

This is the story of what God can do through the life of a person extraordinarily surrendered to His will.

▼▲
BILLY KIM History and miracles combined to make Billy Kim the person he is today. Aptly described as the Billy Graham of Asia ¿Kim has had an influence on many world leaders. Kim, former president of the Baptist World Alliance, is the senior pastor of the Suwon Central Baptist Church, which he built from 12 members to over 15,000. He is also the chairman of the Far East Broadcasting Company, and during his tenure at FEBC-Korea, 12 radio stations came into being speaking the gospel into China and North and South Korea.

▼▲
I'm the author/artist and I want to review The Life of Billy Kim: From Houseboy to World Evangelist - eBook.
Back
×
Back
×