Skip to main content
SPRING CYBER EVENT STARTS NOW: And it's a really BIG deal! Up to 88% off through 5/24>
Billy Budd, Sailor
By: Herman Melville
Stock No: WW523723 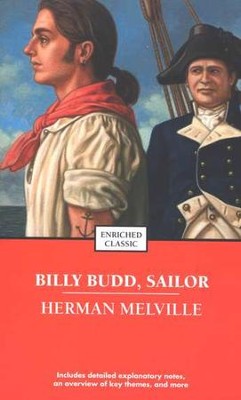 ▼▲
Unjustly accused of plotting mutiny, Billy Budd and his accuser are called to give account to the captain. Unable to answer due to a speech impediment, Billy Budd lashes out and accidentally kills his accuser, setting in motion a court martial that sets his life at stake. 166 pages, softcover.

▼▲
Enriched Classics offer readers accessible editions of great works of literature enhanced by helpful notes and commentary. Each book includes educational tools alongside the text, enabling students and readers alike to gain a deeper and more developed understanding of the writer and their work.

Billy Budd, Sailor has been called the best short novel ever written. In his brilliantly condensed prose, Herman Melville fashions a legal parable in which reason and intellect prove incapable of preserving innocence in the face of evil. For all those who feel themselves threatened by a hostile and inflexible environment, there is special significance in this haunting story of a handsome sailor who becomes a victim of man’s intransigence.

Enriched Classics enhance your engagement by introducing and explaining the historical and cultural significance of the work, the author’s personal history, and what impact this book had on subsequent scholarship. Each book includes discussion questions that help clarify and reinforce major themes and reading recommendations for further research.

▼▲
Herman Melville was born in 1819 in New York City. After his father's death he left school for a series of clerical jobs before going to sea as a young man of nineteen. At twenty-one he shipped aboard the whaler Acushnet and began a series of adventures in the South Seas that would last for three years and form the basis for his first two novels, Typee and Omoo. Although these two novels sold well and gained for Melville a measure of fame, nineteenth-century readers were puzzled by the experiments with form that he began with his third novel, Mardi, and continued brilliantly in his masterpiece, Moby-Dick. During his later years spent working as a customs inspector on the New York docks, Melville published only poems, compiled in a collection entitled Battle-Pieces, and died in 1891 with Billy Budd, Sailor, now considered a classic, still unpublished.

▼▲
I'm the author/artist and I want to review Billy Budd, Sailor.
Back
Back