Billingsly: The Bear with the Crinkled Ear - eBook
By: E.R. Braithwaite 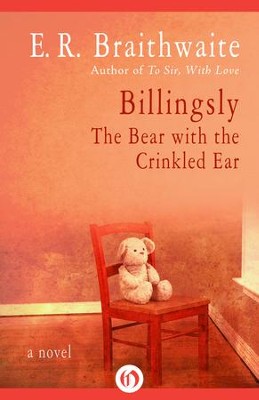 Billingsly: The Bear with the Crinkled Ear - eBook

▼▲
A little girl and an extraordinary teddy bear share the secrets of a wondrous, sometimes puzzling world in this charming children’s tale that celebrates diversity, from the acclaimed author of the schoolroom classic To Sir, With Love
Lisbeth has a new best friend, her toy bear, Billingsly, who has one perfectly formed ear that is ideal for hearing what goes on in the world around him. But with his left ear, which is misshapen, he listens to Lisbeth alone. When she speaks into Billingsly’s crinkled ear, Billingsly speaks back, though he’ll talk to no one but Lisbeth because adults would never listen to him the way she does, and other children tend to shun him because he is different. When Lisbeth is in school, Billingsly enjoys adventures from his perch on the windowsill in her bedroom with animals roaming the outside world and magical creatures like the Tooth Fairy and the other bear in the mirror. But his greatest adventures take place when he is in Lisbeth’s arms, for nothing is more magical than a little girl’s love.
Filled with wit and wonder, Billingsly is the tale of an extraordinary friendship that is sure to enchant children of all ages, and adults who are young at heart.

▼▲
E. R. Braithwaite was born in British Guiana (now Guyana) in 1912. Educated at the City College of New York and the University of Cambridge, he served in the Royal Air Force during World War II. Braithwaite spent 1950 to 1960 in London, first as a schoolteacher and then as a welfare worker—experiences he described in To Sir, With Love and Paid Servant, respectively. In 1966 he was appointed Guyana’s ambassador and permanent representative to the United Nations. He also held positions at the World Veterans Federation and UNESCO, was a professor of English at New York University’s Institute for Afro-American Affairs, taught creative writing at Howard University, and was the author of five nonfiction books and two novels. He passed away in 2016 at the age of 104.

▼▲
I'm the author/artist and I want to review Billingsly: The Bear with the Crinkled Ear - eBook.
Back
×
Back
×