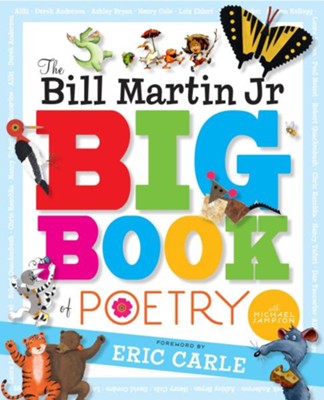 ▼▲
The definitive anthology of children's poetry, collected by a beloved author

Years in the making, this full-color treasury contains nearly two hundred poems, all of them handpicked by Bill Martin Jr. Traditional children's poems are presented alongside contemporary pieces, and the collection is capped off with tributes by Eric Carle and Steven Kellogg, two of Bill Martin Jr's best-known collaborators. This essential compilation also features original illustrations by award-winning artists, including Ashley Bryan, Lois Ehlert, Steven Kellogg, Chris Raschka, Dan Yaccarino, Nancy Tafuri, and Derek Anderson. This beautiful anthology is sure to become a classic.

Michael Sampson is a New York Times bestselling author of twenty-two books for young children, including Chicka Chicka 1, 2, 3 and The Bill Martin Jr Big Book of Poetry. He and Bill Martin Jr wrote many popular books together, including Panda Bear, Panda Bear, What Do You See? and Baby Bear, Baby Bear, What Do You See? Michael Sampson lives in Flagstaff, Arizona.

Eric Carle (1929–2021) was acclaimed and beloved as the creator of brilliantly illustrated and innovatively designed picture books for very young children, including Papa, Please Get the Moon for Me; Have You Seen My Cat?; and TheTiny Seed. His best-known work, The Very Hungry Caterpillar, has been translated into seventy languages and sold over fifty-five million copies. Carle illustrated more than seventy books, many bestsellers, most of which he also wrote, and more than 170 million copies of his books have sold around the world. In 2003, Carle received the Children’s Literature Legacy Award for lifetime achievement in children's literature. In 2002, Eric and his wife, Barbara, cofounded The Eric Carle Museum of Picture Book Art (CarleMuseum.org) in Amherst, Massachusetts, a 40,000-square-foot space dedicated to the celebration of picture books and picture book illustrations from around the world, underscoring the cultural, historical, and artistic significance of picture books and their art form. Eric Carle passed away in May 2021 at the age of ninety-one. His work remains an important influence on artists and illustrators at work today. Find out more at Eric-Carle.com.

Steven Kellogg is the beloved illustrator of more than one hundred books for children including Clorinda and Clorinda Takes Flight, and he has been awarded the Regina Medal for his entire body of work. Mr. Kellogg works in an old barn overlooking Lake Champlain in Essex, New York, where he lives with his family.

▼▲
I'm the author/artist and I want to review Bill Martin Jr. Big Book of Poetry.
Back